Professor Wilson discussed the underlying similarities in cases of racial bias in police/citizen interaction as well as in résumé evaluation. 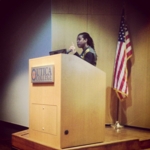 Public lectures delivered at The Applied Ethics Institute at Utica College can be accessed at:

Sponsored by the Applied Ethics institute and the Campus Theme Committee.