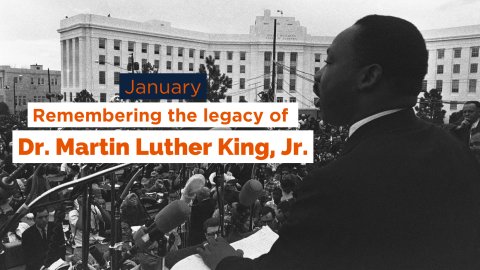 During the month of January, Utica College and the Division of Diversity, Equity, and Inclusion & Student Transitions take time to remember the legacy of The Reverend Dr. Martin Luther King, Jr.

Baptist minister and civil rights activist Dr. King was born in 1929 in Georgia. From leading the Montgomery Bus Boycott of 1955 to 1963’s March on Washington, which galvanized nearly 200,000 people to mobilize for civil rights and equality, Dr. King is well-known as a champion of the Civil Rights Movement.

The campaign for a federal holiday, now celebrated on the third Monday of January, in his honor began shortly after his assassination in 1968, but was not formally recognized until 1986 and did not receive national recognition until 2000.

We encourage our campus community to be proactive in their education and learn about the rich history of Indigenous peoples worldwide, be mindful of representation and create spaces for Indigenous voices, and to be an advocate for Native American and Indigenous rights in their own communities.

The Office of Student Living and College Engagement and the Division of Diversity, Equity, and Inclusion and Student Transitions presents
7:00pm to 9:00pm Virtual

Martin Luther King, Jr., gave his famous "I Have a Dream" speech from the steps of the Lincoln Memorial in
6:00pm to 7:30pm Wilcox Center

"Injustice anywhere is a threat to justice everywhere." "The time is always right to do what is right." "In the
7:00pm to 8:00pm Virtual; Zoom