What are pronouns, and why do they matter? 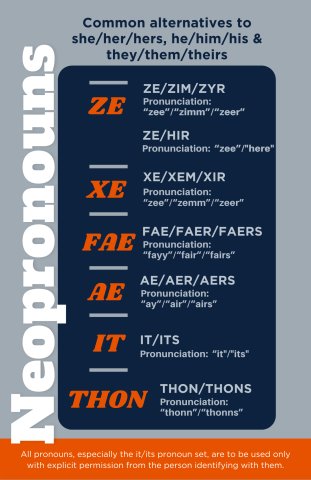 A pronoun is “a word that is used instead of a noun or noun phrase, for example he, it, hers, me, them, etc.,” according to the Oxford Dictionary. In English, pronouns identify people based on their gender, so English speakers learn to sort people, mostly into masculine and feminine categories, from a young age when acquiring language.

Occasionally, because English regularly forces us to identify people with a particular gender in order to refer to them, we may mistakenly assume what pronouns to use and get it wrong. This is similar to a student intending to show respect to a faculty member with the courteous address of “Ma’am” or “Mrs. So-and-so” instead of “Professor” or “Dr.” Harm may not be intended. Nonetheless, Utica College strives to create an environment where we care about and respect one another, so it’s important to do better and get it right.

The best way to learn a person’s pronouns is to ask directly and then make a consistent effort to use them. If you don’t know someone’s pronouns, it’s appropriate to use the indefinite singular “they/them,” just like you might if you encountered a missing item and didn’t know who had left it behind “Oh, look! Someone left their pen!”

It’s understandable you might mess up, especially as you first get used to asking for, rather than assuming, pronouns. If you do, the best way to handle it is to briefly acknowledge your mistake and move on. When we repeatedly “deadname”(refer to or address someone by a name they no longer use) or misgender (refer to or address someone with the wrong pronouns), even if unintentionally, we harm that person by ignoring their identity. This behavior can also risk outing someone’s trans identity and can put them at risk of further harm.

At Utica University, we strive to use language that is inclusive to everyone by honoring true pronouns, names, and titles.

Utica University’s Department of Sociology and Anthropology offers a Minor in Gender Studies that enables students to develop a critical awareness of socially and culturally formed gender patterns and the intersection of gender with other relations of power, such as sexuality, race, class, nationality, religion, marital status, and age.

Gender studies is an interdisciplinary academic field that draws on feminist, gender, and queer theories and scholarship to analyze the experiences, perspectives, and contributions of people in various cultural settings and time periods, including men, women, trans, intersexed, and gender nonconforming individuals.