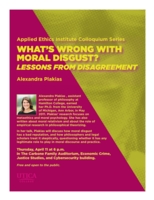 Professor Plakias observed how moral disgust has a bad reputation: philosophers and legal scholars treat it skeptically, questioning whether it has any legitimate role to play in moral discourse and practice. In this talk, she surveyed some of the most prominent reasons for rejecting moral disgust and argue that none stands up to scrutiny.  She offered an alternative diagnosis of our discomfort with disgust, one that draws on its role in moral disagreements. On this account, the problem of disgust in the moral domain has to do with the way it entrenches disagreements and distances disputants, acting as a barrier to moral convergence. 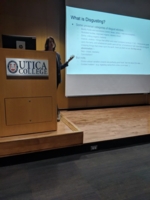 Public lectures delivered at The Applied Ethics Institute at Utica College can be accessed at: