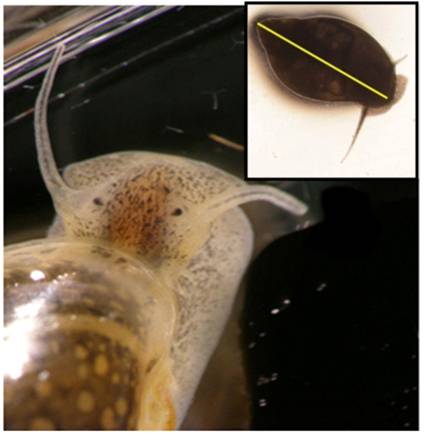 Light pollution (artificial light in normally dark nocturnal habitats) may have wide-ranging effects on organisms, including altered behavioral patterns, growth rates, and reproduction. Physa acuta is an aquatic snail living in habitats that may be exposed to light pollution. Physids have easily observable behaviors, fast growth rates, and reach maturity within a few months. We conducted behavioral and rearing experiments exposing snails to 100 lx diurnal illumination and four nocturnal phototreatments (0.0001, 0.01, 1 or 100 lx). We found no activity differences due solely to phototreatment. We found significant variation in activity due to time of day: more activity during dark-to-light than light-to-dark transitions, but no activity differences between mid-photophase and mid-scotophase. We found an interaction effect of night lighting treatment by time: only snails exposed to the dark night treatment (0.0001 lx) showed significant variation in activity between the light-to-dark and dark-to-light transition periods; those in the continuous lighting treatment (100 lx) showed relatively low activity during both transitional periods. We also examined growth and reproduction rates of snails raised in phototreatments for four months. We found a significant time-treatment interaction effect in growth, with snails in 0.01 lx treatments growing the largest. Shell strength was not influenced solely by treatment type. Onset of reproduction also differed between the nocturnal treatments; snails in 1 lx treatments laid eggs earlier than other treatments. Sex-hormone concentrations in 1 lx treatments also differed significantly from other treatments. Results suggest P. acuta are generally crepuscular, and that nocturnal light levels may have many far-reaching effects.

JOIN US ON CAMPUS: