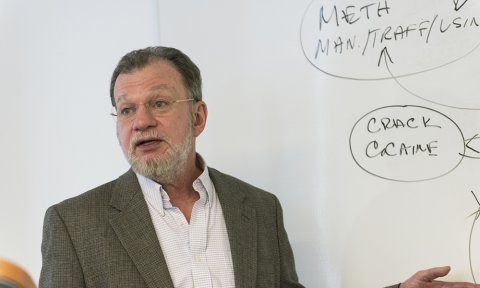 Donald J Rebovich, Ph.D., is a distinguished professor of criminal justice and Director of Financial Crime Programs (Financial Crime Investigation and Financial Crime and Compliance Management programs) at Utica College. He is also Executive Director of the Center for Identity Management and Information Protection (CIMIP) of Utica College. He serves on the board for the academic journal Victims and Offenders where he recently was guest editor for an issue focused on white collar crime and technology.

Before coming to Utica College, Prof. Rebovich served as research director for the National White Collar Crime Center (NW3C) and the American Prosecutors Research Institute. At NW3C he was responsible for directing the national analysis of Internet crime report data generated by the FBI's Internet Fraud Complaint Center and directing the National Public Survey on White Collar Crime.

His recently authored the book Crimes Against the Environment (2021), an examination of environmental crime through the perspectives of those who are victimized, those who commit the offenses, how those crimes are committed, how the offenders try to escape detection, and those who are responsible for handling these types of cases in court.

Amid his previous publications, Dr. Rebovich is the author of Dangerous Ground: The World of Hazardous Waste Crime, which presented the results of the first empirical study of environmental crime and its control in the United States. He is co-author of the 2015 U.S. Department of Justice study Hiding in Plain Sight? A Nationwide Study of the Use of Identity Manipulation by Registered Sex Offenders. His background includes research in economic crime victimization, white collar crime prosecution, and multijurisdictional task force development.

Prof. Rebovich has served as advisor to the U.S. Department of Justice on tribal technology and information sharing, and on environmental crime control as well as serving as advisor to The Global Center for Evidenced-Based Corrections and Sentencing, Griffith University, Brisbane, Australia. He obtained his B.S. degree in Psychology from the College of New Jersey and received his M.A. and Ph.D. degrees in Criminal Justice from Rutgers University.