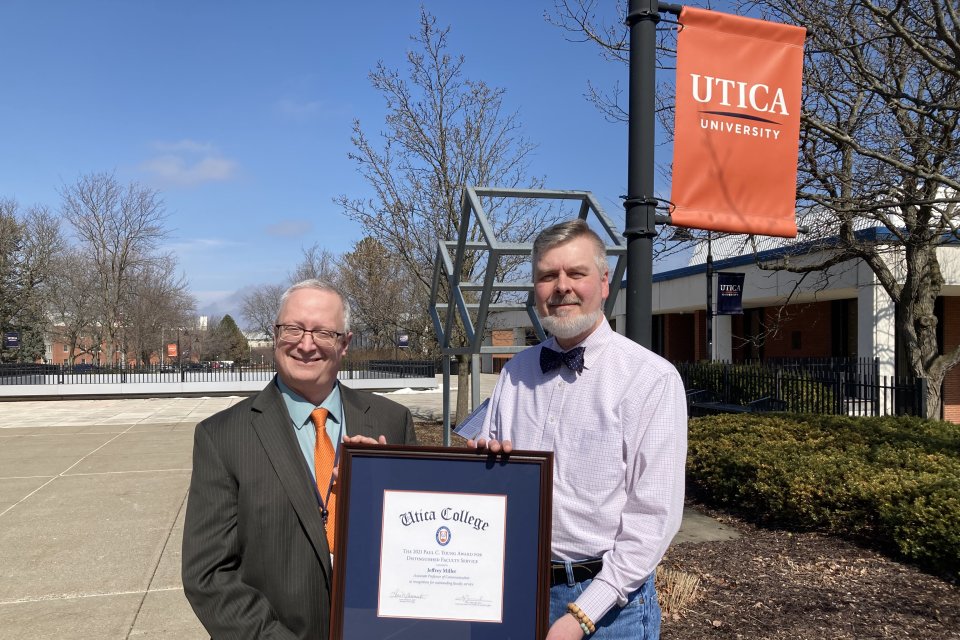 Jeffrey Miller, associate professor of Communication and Media, has been named the 2022 recipient of the coveted Paul C. Young Award for Distinguished Faculty Service at Utica University.

Miller earned a bachelor’s degree in broadcasting, journalism and speech from Buffalo State College and a masters and doctorate in communication from University of Buffalo. He joined Utica in 1997.

Miller is the director of FILM@UC, coordinating the university's film series for the last 22 years. He served as faculty advisor to WPNR PM from 1998 to 2006, and from 1997 to 2009, he served as a founding member of the Executive Committee of the International Comic Arts Forum (ICAF). More recently, he was elected to the American Association of University Professors (AAUP) board.

In 2007, Miller was awarded the prestigious and highly selective Fulbright Lecture Scholarship to teach at National Chengchi University (NCCU) in Taipei, Taiwan as Visiting Professor of International Communication Studies. The program is sponsored by the U.S. Department of State Bureau of Educational and Cultural Affairs. Miller also presented in Stockholm, London, Krakow and Dublin.

More recently, Miller has focused his scholarship on incorporating social justice into the Communication curricular options.

The Paul Young Award recognizes his everlasting impact on Utica University. Young, who lost his battle with liver cancer on Oct. 1, 2012, left behind a legacy. He earned a bachelor’s degree from the University of Illinois at Chicago, and a masters and doctorate from the University of Iowa in 1989. An assistant professor of history and Black Studies, Young joined Utica in 2001. His areas of scholarship focused primarily on civil rights and the working class, writing nearly 50 biographies on civil rights, specifically African-American labor movements in the 1920s and 1930s. Young was also well known throughout the Mohawk Valley, giving many presentations on civil rights.