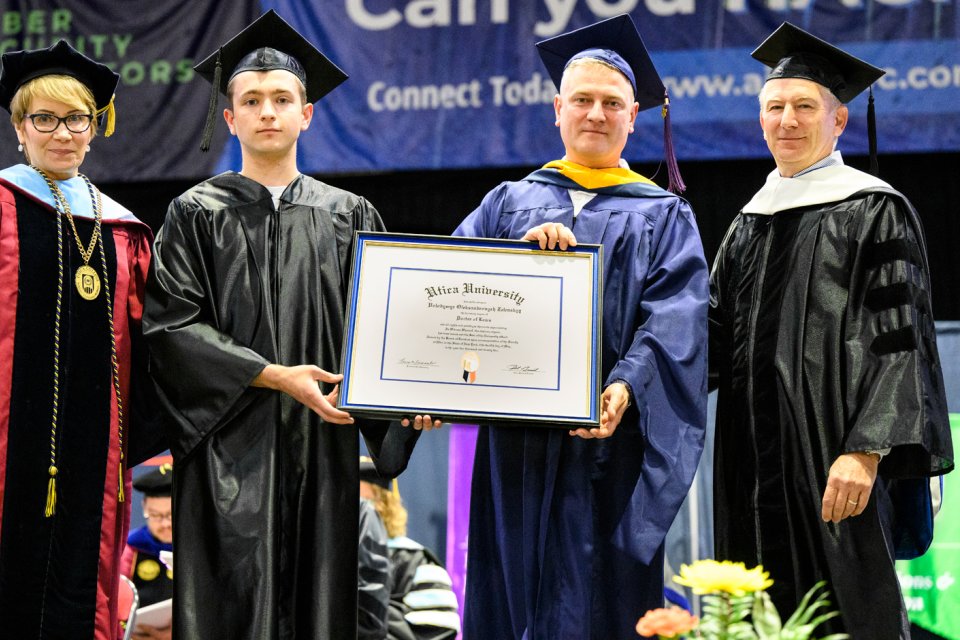 “President Zelenskyy has stood strong as a symbol to his people of resistance against overwhelming odds."

Utica University conferred an honorary Doctor of Laws degree to Ukranian President Volodymyr Zelenskyy at its 2022 Undergraduate Commencement ceremony, in recognition of his “courageous and principled stand against violence and tyranny.”

The honorary degree was presented by Chair of the Utica University Board of Trustees, Robert Brvenik, along with Professor of Practice in Cybersecurity Maxim Gorbachevsky (who is originally from Ukraine) and Vasyl Yurkuts, a Ukrainian student in the English program at Utica. The trio accepted the degree on behalf of the honoree.

“We are proud to join a distinguished group of higher education institutions in conferring an honorary degree upon Volodymyr Zelenskyy, sixth and current President of Ukraine,” Brvenik said. 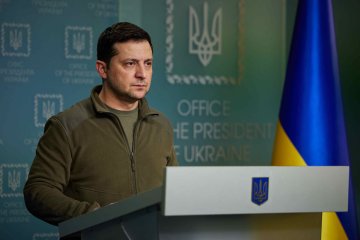 Volodymyr Zelenskyy was born on January 25, 1978 in Central Ukraine and graduated from Kyiv National Economic University with a degree in law in 2000. Following a successful career as an actor, performer, script writer, and producer of a stand-up comedy team, Mr. Zelenskyy founded an NGO named The League of Laughter. Through this agency, he produced ten feature length movies, won more than thirty awards of the National Television Award of Ukraine, and received numerous prizes and recognitions through international film festivals and media forums. He directed his artistic efforts into humanitarian relief as military hostilities erupted in the Donbas region of the Ukraine, where he rendered support to the Armed Forces with funds, equipment and arranged shows on the front line and in different military units.

In October 2015, with a Russian-backed insurgency raging in eastern Ukraine and endemic corruption undermining public confidence in government, Mr. Zelenskyy took on the role of a teacher turned president in the hit Ukrainian television show, Servant of the People. The show would provide something of a political road map for him. On April 21, 2019, Mr. Zelenskyy was elected president of Ukraine with an impressive seventy-three percent of the vote.

On February 24, 2022, Russian President Vladimir Putin initiated an invasion of the Republic of Ukraine. Almost immediately, President Zelenskyy and the Ukrainian population became worldwide symbols for the defense of democracy and human rights in the face of the invasion.

“President Zelenskyy has stood strong as a symbol to his people of resistance against overwhelming odds,” Brvenik said. “He has further rallied the support of the international community, warning that the Russian invasion represented a “new Iron Curtain” descending upon Europe.”

Brvenik called President Zelenskyy’s courageous and principled stand against violence and tyranny, defense of diversity in all its forms, and commitment to self-determination “an inspiration to all freedom-loving people.”

“It is therefore with great pride that Utica University presents President Zelenskyy with the honorary degree Doctor of Laws, honoris causa, and all rights and privileges thereunto appertaining,” Brvenik said. “In Witness Whereof, this diploma signed, has been issued and the Seal of the University affixed. Issued by the Board of Trustees upon recommendation of the Faculty at Utica in the State of New York, this twelfth day of May, in the year 2022.”