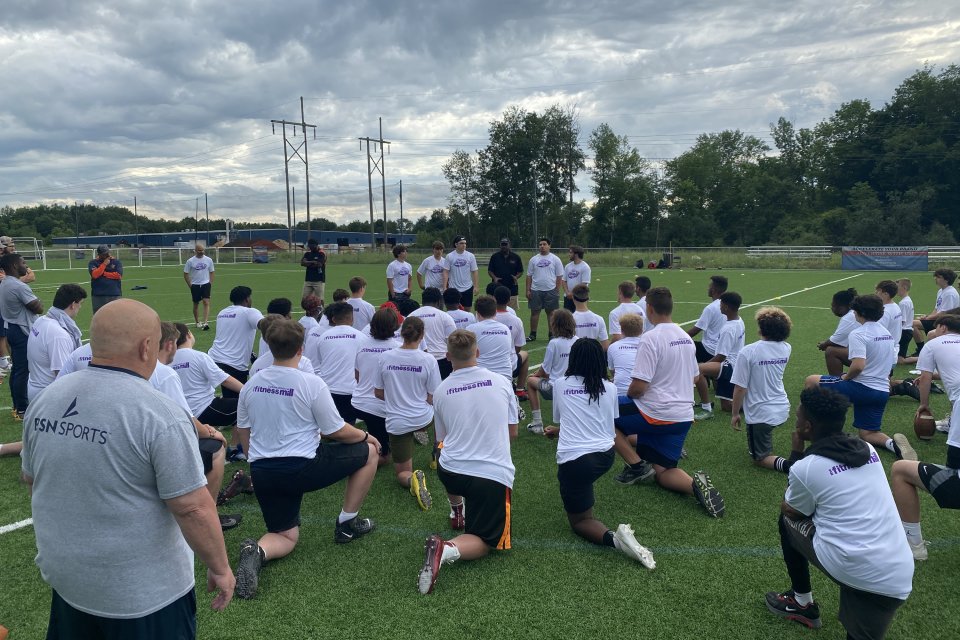 “You can be tough and strong, yet still feel emotion.”

The words resonated with the young men sitting on the turf in between football drills.

For the third time in as many years, Utica College partnered with Kristin’s Fund and “A Call to Men” to present middle school and high school boys the opportunity to sharpen their football skills while also being educated on topics such as character development, healthy masculinity, domestic violence and many other valuable topics.

Kristin’s Fund, a non-profit organization dedicated to creating safer communities through domestic violence prevention, was created after Kristin Palumbo Longo tragically lost her life in 2009 after an act of domestic violence.

Joe Palumbo, brother of Kristin and co-founder of Kristin’s Fund, sees this initiative as one that not only can individually help the young men participating, but hopefully over time will impact the communities in which these soon-to-be grown men will live in.

“What we are hoping to do is plant a seed in their consciousness,” Palumbo said. “If we have an effect on five kids in this camp and they then go teach one of their peers what they learned, little by little the impact of this event will spread into the communities, and that is really the end goal here.”

Palumbo also believes that sending this message through the game of football, a sport that many believe crafts men to hide their true emotions, is monumental in helping mold these individuals into young responsible men.

“I truly believe there can be a balance, you can be tough and strong yet still feel emotion and be genuine, he said. “If a so-called tough guy plays football but is also a person who can show his emotions, then I think others see that and feel inspired.”

The camp included an equilibrium of football drills with positive and educational lessons weaved in between presented by the “A Call to Men” trainers. These trainers are dedicated to helping spread their very real and eye-opening messages through the use of powerful anecdotes and constant engagement with the young athletes at the event.

Rickie Houston, the director of training for “A Call to Men,” has been working with the organization for 12 years. He, along with his co-workers, have traveled all over the country to deliver their messages, with every visit having a special place in Rickie’s heart.

“We really want to get out there and change the way people view the women in their life,” Houston said. “When we can see the impact of what we do it stands out more to us and makes us feel like we are changing people’s lives for the better.”

While the Call to Men trainers worked on delivering impactful messages, UC head football coach Blaise Faggiano and his staff took care of the other aspect of the camp. Multiple offensive and defensive drills were set up to help the kids work on the fundamentals of their game.

Coach Faggiano, who has been with the Utica College program for 13 seasons, could not be any prouder of his guys for wanting to contribute to such a great campaign. Faggiano believes lessons like the ones these two organizations strive to teach are immensely valuable and will go a long way in helping shape the men involved and the communities they decide to settle down in, just as it did to him when he first experienced all of it a few years back.

“The message these trainers spread really made me rethink how I talk on a daily basis to my athletes and my kids,” Coach Faggiano said. “Football is a game of family and seeing my staff talking to these young people who might be trying to find themselves about such an important topic means a lot to me and the community.”