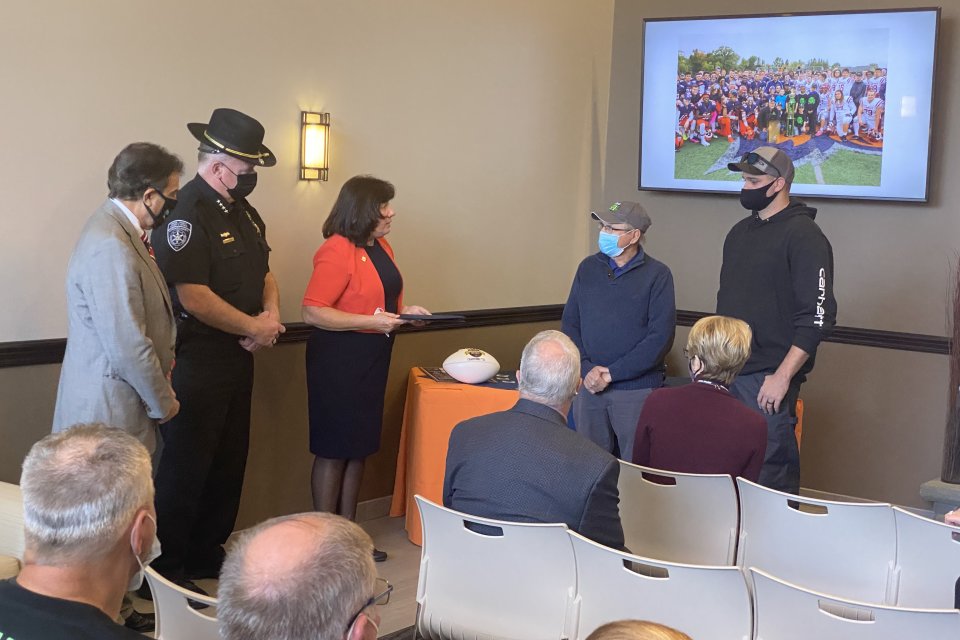 More than 3,500 people are killed by fires each year in the U.S. alone. Even more frightening are the aftereffects that these brave, often volunteer, firefighters face from toxic fumes while trying to save others. The Utica College Football team will honor these brave firefighters once again at their upcoming 4th annual New York State Tool Believe Bowl.  Today Blaise Faggiano, Utica College Football Head Coach, introduced the honorary captains and revealed the special jerseys for the team’s upcoming game.

The presentation featured the recognition of two local volunteer firefighters as honorary Pioneer captains. Firefighter Gabe Streiff has been an active member of the Floyd Volunteer Fire Department for 43 years, and was diagnosed with stage four pancreatic cancer in May of 2020. Lieutenant Kelby Ueltschi of the Barneveld Fire Department was diagnosed with stage four Nodular Hodgkin’s Lymphoma at the age of 30.

“It’s not about football,” Brian McQueen says, “it’s about those first responders battling occupational cancer and life-threatening illness, and it's about the children of the Thea Bowman House.” McQueen is the co-founder of Believe 271, an organization that aims to provide financial assistance to volunteer firefighters, EMTs and members of ladies' auxiliaries in Oneida and Herkimer Counties who suffer from life threatening illnesses, such as cancer. McQueen is also a Volunteer Assistant Coach for the UC football team, and responsible for planning and implementing community outreach for the team.

The Utica New York State Tool Believe Bowl take place this Saturday at noon at Gaetano Stadium as the Utica College Pioneers (4-3) take on the SUNY Morrisville Mustangs (1-6). In compliance with Utica College’s Spectator Policy, masks are required at outdoor sporting events with more than 250 people in attendance.