Support, Opportunity, and a Fast-Track to Her Nursing Career: Kim Slezak ‘21 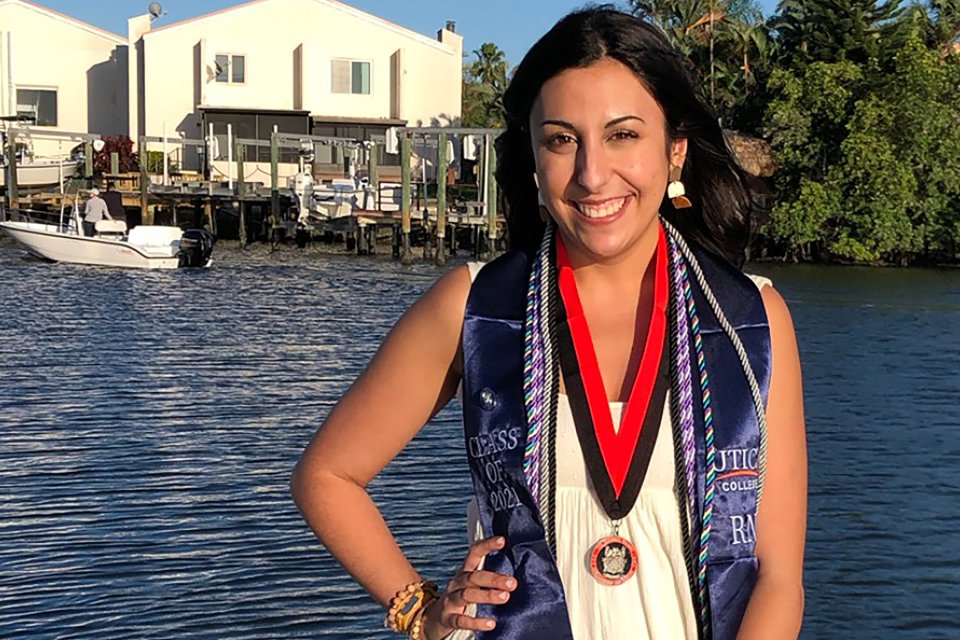 “I really felt like Utica valued my accomplishments as a student and provided me with the atmosphere where I could be most successful while studying nursing.”

Kim Slezak ‘21 has been interested in healthcare a long time. When she was a young child watching her grandmother become ill, young Kim wished she had been able to help - a moment and realization that forever cemented her path.

“Since then I knew I wanted to become a nurse so that I can be better educated about healthcare and help those in need when they are critically ill.”

That dream moved a lot closer to reality when Kim discovered the Accelerated Bachelor for Science in Nursing program at Utica College in St. Petersburg, Florida, where she was able to gain acceptance into the program even before all her pre-requisites were complete. That, along with Utica College's three different cohort start dates per year, flexibility of online courses, and the incredible support of admissions counselors allowed her the ability to start nursing school sooner than any other program.

“I really felt like Utica valued my accomplishments as a student and provided me with the atmosphere where I could be most successful while studying nursing.”

While the opportunities available through the ABSN program at Utica College certainly allowed Kim to step into her career sooner, it also allowed her the chance to stand out as an individual, never needing to worry about getting lost in the crowd.

“At Utica College, I don't feel like a number. The professors know me by name and will bend over backward to help me in all of my endeavors. Every professor has been so supportive of my personal and professional goals and my time at Utica has awarded me with opportunities to network with nurses nationwide and become a leader in my community.”

That included several leadership roles with the Utica College Student Nurses Association (UCSNA), which Kim says provided her not only the chance to give back to the community, but the opportunity to network with her peers and professors, and further her professional career through conference and speaker events.

“As a second semester student, I had the privilege of joining the UCSNA officer team as Vice President, where I strengthened my leadership and time management skills in preparation for stepping into the role of President in my third and fourth semesters. This opportunity has made me a better team player, educator, and community service member, which will prove invaluable to my career as a nurse. With such a tight knit community at the St. Petersburg campus, I have been able to get to know my professors and my peers in lower cohorts on a personal level, which can seem nearly impossible at a large school. With a common goal of all working to become nurses, I have cherished the relationships I have been able to build during my time as a student at Utica.”

Growing up in New Jersey, Kim finds herself a long way from home, but she says the distance is made up for in the immense opportunities available in the Tampa Bay area - something she says is the most satisfying part of studying in St. Petersburg.

“Where I grew up and went to college initially, students often had to drive more than three hours to New York City or Philadelphia to get to jobs or internships, and nursing students had minimal options when it came to clinical placements and future jobs - simply because there are few hospitals nearby. Here in Tampa Bay, there are countless hospitals all within a commutable distance - including Level I and II trauma centers and a comprehensive pediatric trauma center, in addition to three major hospital systems, which opens job opportunities up immensely for new graduates in our area.”

Following her graduation in May 2021, Kim began her career as a registered nurse in the neuro intensive care unit at Bayfront Health St. Petersburg, but that didn’t mean she left Utica College far behind. At that same time, she stepped into an adjunct faculty position at UC where she can continue her work in UCSNA and as a skills tutor to future nursing cohorts.

“Every time I enter the hospital I am reminded of why I want to become a nurse and gain an even greater drive to learn and do more so that I can be the best nurse possible.”

It’s a journey that she says was made possible thanks to the care, support, and experiential learning opportunities she found at Utica College.

“From hands-on education in the lab and clinical settings, to heartfelt letters of recommendation, each faculty member I have met has shown their utmost support for my future nursing career. The professors who teach at Utica are all working nurses with connections in the local hospitals - which can prove invaluable if you work hard and build a name for yourself on campus. I know I would not have secured a position in my dream specialty before graduation if it were not for the help and support that my professors gave me - and I am so thankful that I chose Utica ABSN for my nursing program.”

She hopes that through the example of her own success, others may be inspired to find the same value in a Utica College education that she did.

“My experience at Utica has been invaluable. This is the third four-year college I have attended and I have never felt more supported than I do at Utica ABSN. At the end of the day, we all come here to become registered nurses - and in just 16 short months this program has transformed my life and provided me with the career I have always dreamed of. If I had to do it all over again, I would pick the Utica ABSN St. Petersburg program in a heartbeat.”