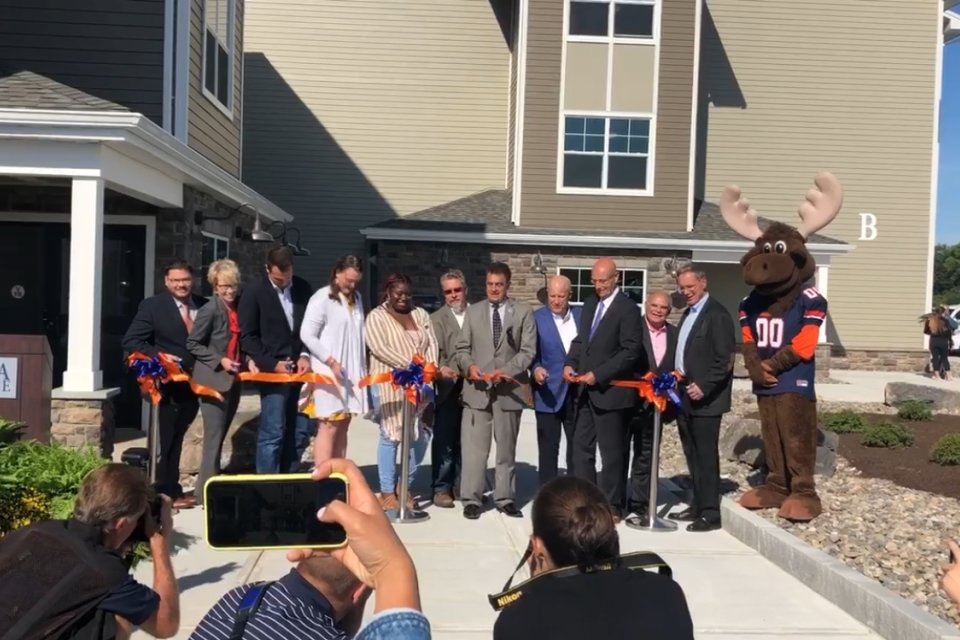 The $14 million-dollar project, a partnership between the Municipal Housing Authority, BBL Construction Services LLC and Utica College, was built by Albany-based BBL, with several UC Construction Management grads and students assuming leadership roles in the project.

"This partnership has allowed UC to offer an affordable, premium-level housing option that keeps more students on campus, where they can live and learn alongside their peers as part of the growing Utica College community," President Laura Casamento said at the event.

Pioneer Village, located behind the Charles A. Gaetano Stadium near the Todd and Jen Hutton Sports and Recreation Center, features three buildings with a total of 144 beds. Each apartment unit includes four single bedrooms, two bathrooms, a living room, a full kitchen with dishwasher, and a washer and dryer. In addition, a community center with a multi-media room, conference room, kitchen, and other amenities was also constructed. Construction began last fall and students moved in last month. Pioneer Village is gender inclusive and houses mostly upperclassmen and graduate students.

"Utica College continues to grow in a variety of ways," Utica College Senior Vice President Jeffrey Gates told those in attendance. "We’ve seen millions of dollars invested in this campus over the past few years and we’re happy to say – we’re just getting started. UC is growing and it’s doing so because of all of you."