From Medellin to Miramar: Becoming a Nurse in the US 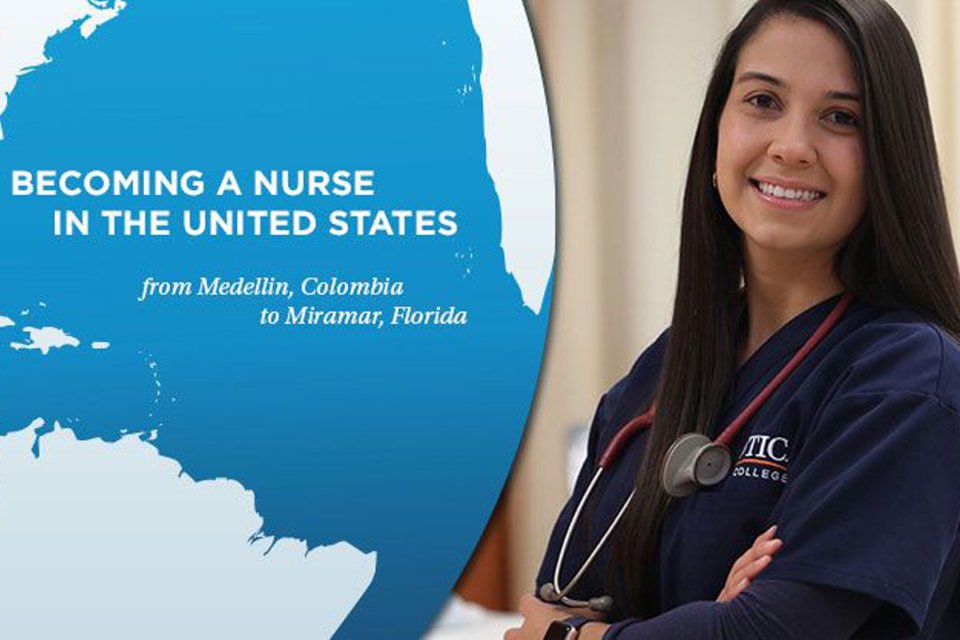 Becoming a nurse in the USA is something Catalina Echeverri Castano is passionate about. So much so that she was willing to start over with nursing school in another country to make it happen.

“I was always very caring. I was always the ‘doctor’ at my own house. When my grandpa had a cut or my grandmother needed a surgical wound, I was always there with my first aid kit,” she says. “It’s something I already had, wanting to take care of people who are not able to do it for themselves.”

That caring nature led her to enroll in a four-year scrub nurse program in her home country of Colombia. But when an opportunity to move to the United States presented itself during her third year of nursing school five years ago, she knew she couldn’t it pass up.

“Coming from a third-world country, it is everyone’s dream to come here,” she says.

So she picked up and moved to the U.S., putting a hold on her nursing education.

She took some time off to work as a nanny, but knew at some point she wanted to become a nurse in the USA. When she discovered Utica College’s 16-month Accelerated Bachelor of Science in Nursing (ABSN) program in Miramar after a few years of living in Florida, she decided to take steps to enroll.

She credits the admissions representative she worked with for making it happen so quickly.

“When I found the Utica ABSN program, I was very happy,” she says.

Why Nursing in the USA?

Once the path to become a nurse in the USA became possible for Catalina, she realized the myriad nursing career options she had available to her, unlike in her home country.

“In Colombia, the way nursing works, there are no specialties to educate yourself further,” she says.

The diverse career options she could pursue in the U.S. piqued her interest in the field — and in starting over with her nursing education here.

"When I came here I found nursing was such a wide field - much, much bigger than it was in Colombia. You have the chance to go into all these different specialties."

It’s true. All kinds of career options become available to those who earn a B.S. in Nursing in the United States, ranging from obstetrics to mental health to pediatric nursing in the hospital setting to informatics and community health nursing. And as a Utica ABSN student, she would get the chance during her clinical rotations to “try on” all these specialties and more.

That fact stood out to Catalina, although for now her particular interest is in anesthesia or emergency care because that is what she experienced during her nursing program in Colombia.

Catalina worked as a nanny when she first came to the U.S., but her passion for nursing always stuck with her. She enrolled in courses at Palm Beach State College to further her education, then heard great reviews from her boyfriend’s sister about Utica College and decided to research the accelerated nursing program.

She learned about the ABSN program in Miramar, which was closest to where she lived, and liked the fact that it would allow her to earn her nursing degree in as few as 16 months.

The support she received from her admissions representative solidified in her mind that Utica ABSN was a great fit for her.

Given Catalina’s unique educational background, she had some specific questions about her enrollment eligibility, mostly when it came to transfer credits. Lucky for her, her Utica ABSN admissions representative was able to answer her questions quickly and develop an academic plan targeted toward her program start date.

For example, Catalina learned that since she had already met the international student requirements from her local community college for admission there, she didn’t have to go through that process again for enrollment qualification for the Utica ABSN program. But she did still have to pass English proficiency and math exams.

“Utica was actually able to take some of the credits I took from Colombia, but most of the credits I had taken that were transferable were from Palm Beach State College,” she says. “That was able to get me the required 65 credits fairly easily.”

Catalina’s Experience in the ABSN Program

Once enrolled in the Utica ABSN program, she didn’t have any hurdles to overcome outside the normal rigors of accelerated nursing school. That involved keeping pace with the ABSN program’s hybrid curriculum, which includes online nursing theory courses, on-site skills and simulation labs and clinical rotations at top healthcare facilities local to the program site in Miramar.

Catalina also had to re-orient herself to the structure of online coursework, figure out how she learns best and develop study strategies to prepare for nursing school exams.

“You have to get used to classes and the way they want you to think, so the beginning is always the hard part,” she says. “After you get used to it, you go with the flow.”

While the Utica ABSN program challenges her, Catalina says she knows all the hard work and dedication is worth it because she knows she’s enrolled in a quality program that is preparing her to achieve her dream: to become a nurse in the USA.