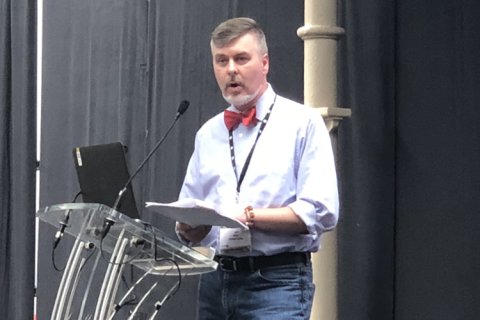 Dr. Jeff Miller is Associate Professor of Communication and a Fulbright Scholar (2007, Taiwan) whose teaching and research focuses on the connections between forms of communication (mass media and journalism, public speech, community organizing), democratic participation, and social justice. Dr. Miller has presented his research at regional, national, and international conferences, including recent conferences in Stockholm, London, Krakow, and Dublin. He also serves as director of FILM@UC, programming and hosting the campus film series for over fifteen years, and was faculty adviser to WPNR FM from 1998-2006.

Dr. Miller earned his B.A. in Broadcasting from Buffalo State College and his M.A. and Ph.D. in Communication from University at Buffalo. In 2007 he was Visiting Professor of International Communication Studies at National Chengchi University (NCCU) in Taipei, Taiwan. From 1997-2009 he served as a founding member of the Executive Committee of the International Comic Arts Forum (ICAF), which has grown over the past twenty years to become the premiere academic conference in the United States for comics studies.

In his free time, he is an avid soccer fan and passionate supporter of both Celtic Football Club (Glasgow, Scotland) and F.C. St. Pauli (Hamburg, Germany), and since 2010 has enjoyed competing alongside students in the College’s annual intramural indoor soccer tournament, which he has yet to win.