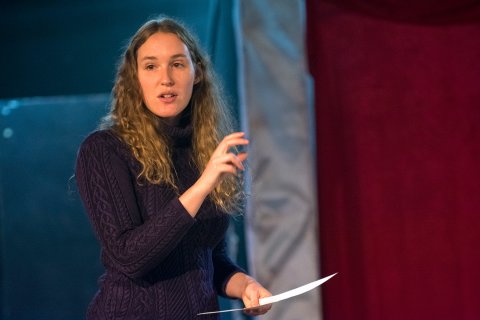 Originally from Juneau, AK, Dr. Wolfe spends a lot of her spare time in the outdoors (hiking, camping, inner tubing, and gardening). She lives in Clinton, NY with her partner and two cats.

Dr. Wolfe's work has appeared in a number of scholarly journals including the Journal of Adaptation in Film and Performance, Ecumenica: A Journal of Theatre and Performance, and Women’s Studies: An Interdisciplinary Journal. She has also published chapters in edited volumes on theatre: her article on the connections between the ancient Greek story of Iphigenia and the popular HBO series Game of Thrones was published in the McFarland Press volume Vying for the Iron Throne: Essays on Power, Gender, Death and Performance in HBO’s Game of Thrones, and most recently she wrote a refutation of the concept of universality in canonical works entitled “Antigone is Dead, Long Live Antigones! Adaptation, Difference, and Instability at the Heart of the Traditional Western Canon” as part of the Routledge collection Troubling Traditions: Canonicity, Theatre, and Performance in the US. In addition to her scholarly work, Dr. Wolfe is an avid theatre director and dramaturg, working with companies in both Seattle and New York. She is a co-founder of the Seattle-based fringe theatre company Handwritten Productions, with which she has directed numerous shows. Here at Utica University, she has directed Tom Stoppard’s Arcadia, Howard E. Koch's The War of the Worlds, Susan Glaspell's Trifles, and the world premiere of a new translation she commissioned from kabuki translator Mark Oshima of Tsuruya Nanboku IV's Ghost Stories at Yotsuya.

“Antigone is Dead, Long Live Antigones! Adaptation, Difference, and Instability at the Heart of the Traditional Western Canon” in Troubling Traditions: Canonicity, Theatre, and Performance in the US, Lindsey Mantoan, Matthew Moore, and Angela Farr Schiller, eds. New York: Routledge (2021).

“Human Sacrifice, Nuns, and Gender-Bent Kings: The Effect of Religious Change on Gender Presentation in Early Modern Adaptations of Iphegenia among the Taurians,” in Ecumenica: Performance and Religion, Vol. 13, No. 1 (2020): 21-51.

“The ‘Most Shocking’ Death: Adaptation, Femininity, and Victimhood in the Human Sacrifice of Shireen Baratheon,” in Vying for the Iron Throne: Essays on Power, Gender, Death and Performance in HBO’s Game of Thrones. Lindsey Mantoan and Sara Brady, eds. Jefferson, NC: McFarland Press (2018).

Book Review: The Athenian Adonia in Context: The Adonis Festival as Cultural Practice by Laurialan Reitzammer
Reading Religion: A Publication of the American Academy of Religion. electronic publication (April 2018)

“Racine’s Ancients: Paradoxes of Adaptation in the Panegyric Tradition of French Neoclassicism,” in Ecumenica: A Journal of Theatre and Performance. Vol. 11, No. 1 (2018): 53-61.

“Opera’s ‘Return to Antiquity’: Adaptation, Gender, and the Illusion of Authenticity in Gluck’s Iphigénie en Aulide,” in Journal of Adaptation in Film and Performance. Vol. 9, No. 3 (2016): 253-68.

​“Woman, Tyrant, Mother, Murderess: An Exploration of the Mythic Character of Clytemnestra in All Her Forms," in Women's Studies: An Interdisciplinary Journal. Vol. 38, No. 6 (September 2009): 692-719.

THE 136: Elements of Acting

THE 375: Literature of the Theatre