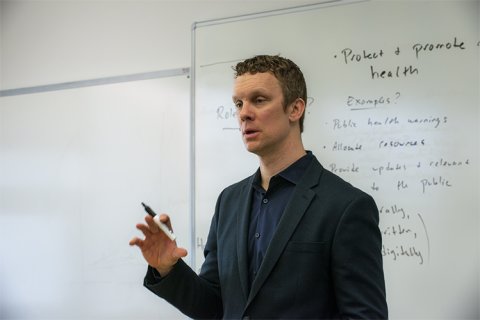 Luke Perry is a tenured Professor of Political Science at Utica University. Perry was a graduate fellow at the University of Massachusetts where he earned an M.A. and Ph.D. in Political Science with expertise in American politics and comparative politics.

A Fulbright Scholar, Perry has lectured at universities throughout Europe and worked with various organizations, including the Junior Statesmen of America, the Kellogg Foundation, the U.S. Peace Corps, and The Washington Center. Perry’s research focuses on U.S. elections, the presidency, and religion and politics.

Perry’s first book, Mormons in American Politics; From Persecution to Power (Praeger, 2012), provided a systematic account of how Mormons overcame being the most persecuted religious group in America to fill prominent positions in American government.

In 2018, Perry developed a book series for Palgrave MacMillan, entitled Palgrave Studies in U.S. Elections, in which he serves as editor. Perry developed two books on the 2020 presidential election, one edited volume on the primary, The 2020 Democratic Primary; Key Developments, Dynamics and Lessons for 2024, and one on the general election, The 2020 Presidential Election; Key Issues and Regional Dynamics.

Perry is a panelist for Ivory Tower on WCNY-PBS in Syracuse since 2018 and was an election analyst for WKTV News Channel 2 in Utica from 2012 to 2020. He served as a correspondent at the Republican and Democratic National Conventions in 2016 and the presidential inauguration in 2017.

Perry founded The Utica College Center of Public Affairs and Election Research in 2018, which he directs. The Center has a global team of contributors who provide political analysis on state, national, and international politics. (Learn more at http://www.ucpublicaffairs.com ) He writes regularly about nationally watched Congressional campaigns in NY-22 for his column NY-22 Minute (read here).