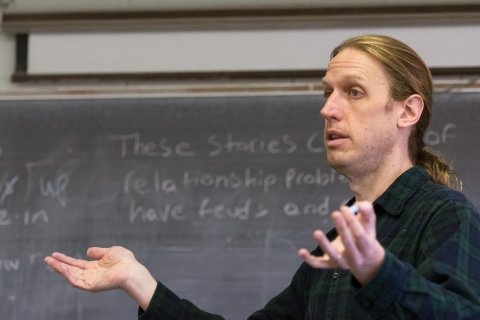 Dr. Jason Denman is Associate Dean of Humanities and Social Sciences at Utica College. Professor Denman teaches a range of courses in composition and literature, particularly British literature to 1800. He has held short-term fellowships at the Folger Shakespeare Library and the William Andrews Clark Memorial Library.

English 245: British Literature Survey, part 1. A survey of British literature from its medieval origins, through the early modern period, and into the beginning of the 18th century.

English 336: Literature of the Early Stuart Period. Major trends in English literature from 1604 to 1660.

English/Theater 375: Literature of the Theatre. This course covers dramatic texts from classical Athens to somewhere near the present, focusing on the broad theme of governance.