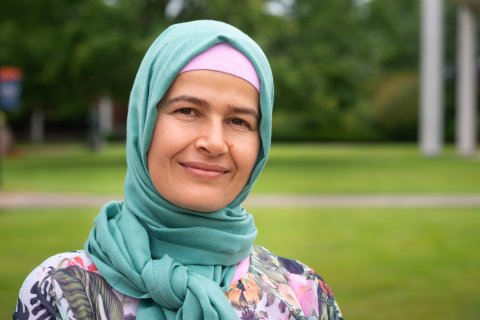 Prof. Hava Turkakin has always been fascinated by the secret works of the universe and thus pursued a degree in Physics. She has a bachelor’s degree from the Black Sea Technical University in Turkey. After teaching several years at various high schools, her instant desire to learn more of physics has carried her to continue her education further.  Hava earned her M.S. and Ph.D. in Space Physics from the University of Alberta. She has taught as a Visiting Assistant Professor at both Bucknell University and the University of Central Arkansas, before coming to Utica University.  Her research interests are solar-terrestrial interactions, space weather,  space plasmas, and plasma waves and instabilities in space. More specifically, Hava conducts research on Magnetohydrodynamic (MHD) waves and Instabilities along the boundaries formed during Solar-Terrestrial coupling. The basis of the solar-terrestrial coupling is the coupling of the large eruptions of plasma - called the solar wind – from the solar atmosphere to the earth’s magnetosphere – a magnetic bubble formed around the earth. Solar wind effects on the Earth’s magnetosphere, ionosphere and thermosphere can influence the performance and reliability of space-borne and ground-based technological systems and form the basis of space weather phenomenon.

Hava loves reading, taking a nature walk, and spending time with her children. In her most spare times, she loves watching Ellen show.

Prof. Turkakin is awarded a Summer Fellowship by the Office of Academic Affairs at Utica University. She is currently conducting a research with a summer student on “Instabilities in Solar-Terrestrial Environment” with this summer fellowship support. SADs and BBFs are two fast flowing regions that form during solar-terrestrial interactions and may have profound impacts on the surrounding regions if they become unstable. Prof. Turkakin is working on a specific instability called Kelvin-Helmholtz Instability and possible emission of waves that may provide an effective mean of energy transportation out of these fast flowing regions. Prof. Turkakin and her student has initiated a paper on this research with the following title:

This paper shows for the first time in the area of space research that often observed waves from an inner region of the Earth’s magnetosphere, the bubble formed by the interaction of the solar particles with the Earth’s magnetic field lines, may be due to the Kelvin-Helmholtz Instability. This paper has been chosen as a spotlight paper among the papers with innovative ideas by American Geophysical Union in 2014.

This paper presents a detailed analysis of the occurrence of the Kelvin-Helmhotlz instabilities and conditions that makes them possible along the boundary of the Earth’s magnetosphere. We identified two types of Kelvin – Helmholtz instabilities as primary and secondary instabilities that occur at different shear flow speeds in this work. We investigated the types of waves that are emitted by this instability as well.

This paper shows the effects of wave trapping in the boundary of the Plasmasphere, which is another inner region of the Earth’s magnetosphere.

PHY151 – General Physics – Core course that is required for multiple program, including

Courses Taught Prior to Utica College

Canadian Federation of Women in Science in Scholarship, 2007