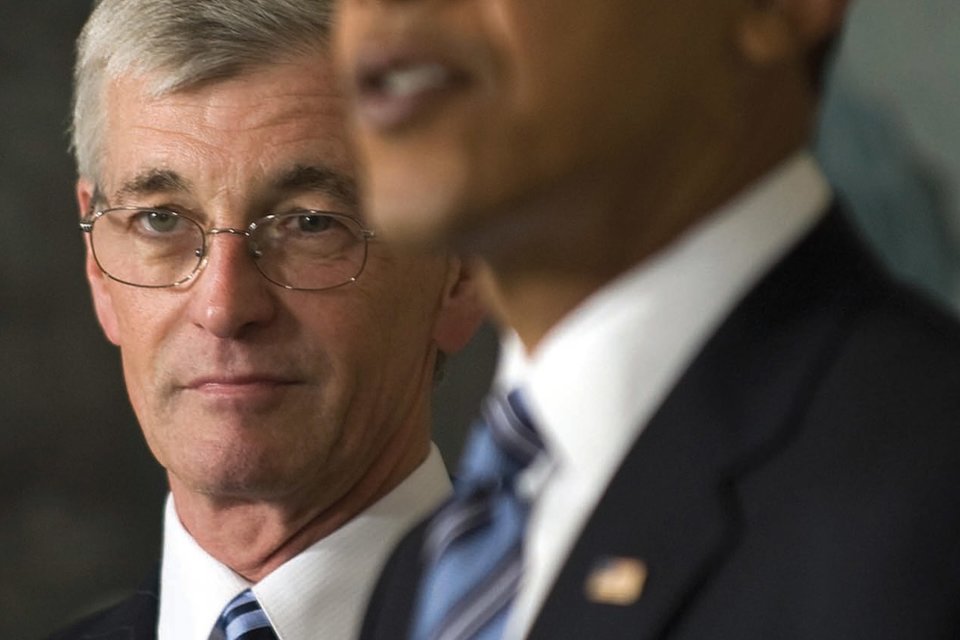 Tapped by President Obama for Army secretary, John McHugh '70 is a long-time supporter of the branch he will soon lead.

His nominator pointed to his impressive list of accolades and accomplishments as well as a demonstrated commitment to country.

In many ways, the moment resembled the many other occasions on which John McHugh '70 has been feted for his public service over his nine terms in Congress - in every way, perhaps, except that the person praising him from behind the lectern this time was the president of the United States.

President Barack Obama announced McHugh as his choice for Secretary of the Army at a June 2 White House news conference. The Senate on September 16 confirmed the nomination.

As Army secretary, the veteran lawmaker and UC alumnus will have statutory responsibility for all matters concerning the Army, including personnel, financial management, communications, and equipment and weapons acquisition. He will advise the Secretary of Defense and the President regarding the Army's capabilities, readiness, and needs. Most importantly, McHugh said upon accepting the nomination, he will continue as he has done since taking federal office - and now on a broader stage - to advocate for the welfare and interests of soldiers and their families.

"I am enormously moved and deeply proud of this nomination," McHugh, a Republican, said, standing with Obama. "I am blessed to be the latest in a growing line of individuals of many different backgrounds, of many different life experiences, and, as my nomination suggests, of different political persuasions who have been provided the chance to heed, to answer new, important, and challenging problems facing this country."

Obama described McHugh as "uniquely qualified to lead" the Army.

"John is a distinguished public servant who will help keep us safe and keep our sacred trust with our soldiers and their families," he told the White House press corps. "He is committed to keeping America's Army the best-trained, the best-equipped, the best-led force the world has ever seen. he will ensure that our soldiers are trained and equipped to meet the full spectrum of challenges and threats of our time."

The president continued, "John understands personally and deeply the sacrifices soldiers and their families make every day. he brings patriotism and a pragmatism that has won him respect on both sides of the aisle."

Fellow UC alumnus and former congressional colleague Sherwood Boehlert '61 opined, "No one could be more deserving of this heavy responsibility at this critical juncture."

McHugh was first elected to the House in 1992 after serving in local and state government positions, including four terms in the New York State Senate, since 1971. He has earned bipartisan praise as a leader in the country's national defense policy. He is the former ranking member of the House Armed Services Committee and its Subcommittee on Military Personnel. He is the longtime co-chair of the House Army Caucus, and served four years as a member of the House Permanent Select Committee on Intelligence. As well, he is a member and former chair of the Board of Visitors of the U.S. Military Academy at West Point.

His 23rd Congressional district in northern New York is home to Fort Drum, headquarters of the Army's 10th Mountain Division, which has seen multiple deployments to both Iraq and Afghanistan in the past eight years.

While the Watertown, NY native describes vacating his seat in Congress and the responsibilities with which his constituents have entrusted him for the past 17 years as a difficult sacrifice, the move to the Pentagon represents a rare opportunity and cone close to his heart.

His parents both served in the Army during World War II. As a congressman, he has worked tirelessly to advocate for and expand Fort Drum, and fought against several proposals that i be closed or transferred as a cost-saving measure. Since the start of the wars in Iraq and Afghanistan, he has made several trips overseas to meet with American troops and military leaders.

"I grew up in the shadows of Fort Drum, and for the last 20 years I've worked in concert with those men and women of the communities around that great facility in support of the men and women of the 10th Mountain Division," said McHugh. "For all the special feelings we have for all of the military, I've held the Army somewhat apart."