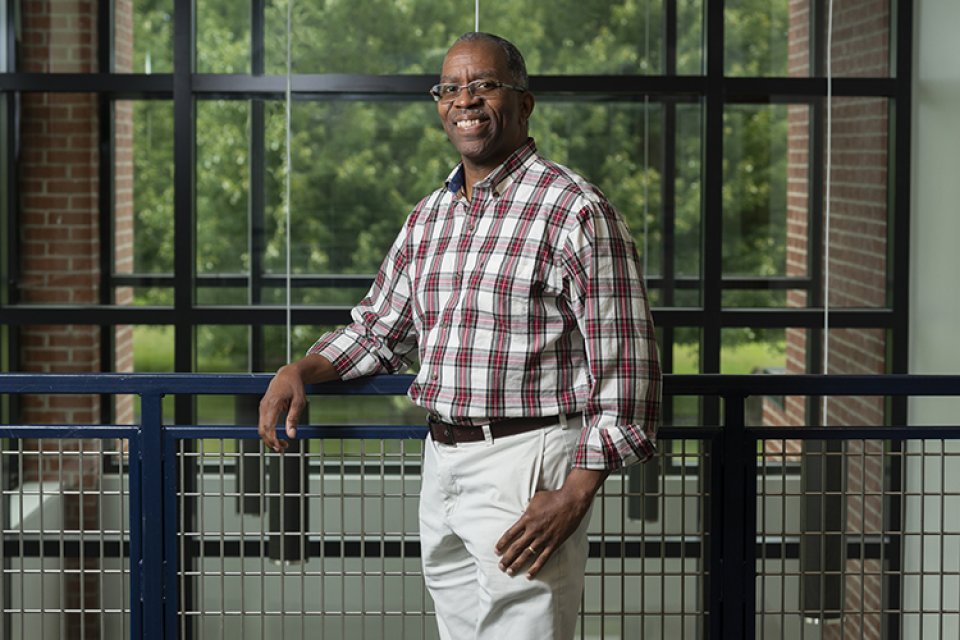 "I do think there is a bit more sympathy for the refugee experience in the community here than there might be in other places."

R. Scott Smith, Professor of Psychology discusses his research into the psychology of cultural evolution as well as the significant changes he's seen at Utica College in his 29 years with the institution.

A: I’ve been teaching psychology here at UC since 1991. I generally teach more applied courses like counseling interviewing process, abnormal psychology, industrial and organizational psychology, and I often teach an anthropology course called “Culture and personality.” Prior to being a professor at UC, I worked for a couple of years at Wake County Child and Family Services in Raleigh, NC. I got my undergrad in psychology at the University of Rochester and both my master’s and doctorate at Duke University in clinical psychology.

Q: What made you come to UC?

A: What brought me to UC was a wonderful mix of circumstances. I had done a program in the summer after I had earned my Ph.D. at Duke University and the keynote speaker at the program encouraged women and underrepresented groups to seek careers in the sciences and particularly go to graduate school in the sciences. The speaker, Julian Earle, a physicist at NASA, happened to be very good friends with Ron Danilowicz, the chair of the computer science department here at UC. Ron mentioned to him that we had a number of faculty positions open and asked Julian if he knew of any freshly minted Ph.D.s, and I was recommended. It’s interesting though, I went for my undergraduate at the University of Rochester and I promised myself that I would never return to upstate NY. I figured I’d go see what it was all about and the warmth of the people offset the cold of the climate, and I’ve been here ever since. Over the years, I’ve reflected on snow blowing vs. boarding my house for hurricanes and decided that snow blowing far outweighs hurricanes.

Q: You’ve been doing some research lately; would you like to tell us about it?

A: The research I’ve been doing for the last several years is the psychology of cultural evolution, particularly focused on an area in the French Caribbean. I first became interested in this because I had an opportunity to go to the island of Martinique a few years ago. During graduate school, I was very interested in the work of Frantz Fanon, who did a lot of interesting work on racism as psychopathology and the psychological impact of racism on its targets.

I sort of filed that in the back in my mind and when I got the opportunity to go there I said to myself “Why does that sound familiar? Wait, that’s where Frantz Fanon is from!” As I learned more about the island and its history I became really fascinated. It’s a very interesting place in that it and its sister island, Guadeloupe, are some of the very few former colonies that ended up deciding not to seek independence from the colonizer but rather to join and petition to be added to the state of France. They basically have the same relationship to France as Hawaii does to the United States. They have representation in the senate and assembly, operate under French laws, use the euro as currency, and pretty much any store you can find in Paris you can find in Martinique. They are French but decidedly not French and I wanted to understand that relationship. The other thing that fascinated me about it is that there’s a very interesting dynamic where they embrace all aspects of their cultural narrative in terms of being able to look at a pluralistic society that in lots of way seems to have a very healthy attitude and much less inter-ethnic conflict than we’re used to.

I co-authored a book with my colleague and wife in 2015 on the cultural evolution in Martinique from 1635 when it was colonized up to the present. We’re currently working on another book on Guadeloupe and looking at these two islands like siblings in a family, quite similar but very different in many ways.

Q: That’s such a unique blend of cultures. Where did this interest come from for you?

A: It’s very interesting to look at both the internal culture of the island and how they relate to other island nations in the Caribbean. This sort of evolved out of my interest in how communities adapt to newcomers like refugees. I’ve done a lot of research on what made Utica such a particularly effective refugee settlement site. The term “culture shock” refers to how people who come to a new place have to adapt, but I became interested in looking at it from the other angle, how do communities adapt to newcomers?

I really wanted to investigate in particular how Utica and the Mohawk Valley in general has adapted to so many refugees. I think currently it’s 1 in every 7 people living in the Mohawk Valley is a refugee; that’s a pretty substantial chunk of our population. We’re fourth per capita in the nation for population who are refugees and we do a pretty damn good job resettling them. In college, everybody talks about how freshmen have to adapt to the new college, but there’s not a lot of talk about how seniors have to adapt to the incoming freshmen. Not a perfect analogy, but it gives an idea of how I approached that topic.

Q: With so many waves of immigrants coming to Utica, do you find that overall are people accepting of new immigrants?

A: Yes, I think that part of the reason Utica has had so much success is that it had a fairly long history of migration and that history still has a current connection. For example, many people of Italian descent here still have grandparents or parents who are first-generation, so there are first and second-generation immigrants from places like Italy, Germany, Ireland, and even Poland, Russia, and Ukraine. There are already established pockets of community that have a living current connection to the experience of immigration and even some refugees, particularly the Russian and Ukrainian population who fled the former USSR in the 1980s because of religious persecution.

One of my findings was that I do think there is a bit more sympathy for the refugee experience in the community here than there might be in other places. That’s not to say that there aren’t people who have really inaccurate and misguided ideas about refugees but what’s interesting to me is a lot of the major systems present here were from the top down very responsive to the presence of refugees. For example, the hospital system here is really ahead of their time with robust translation services, especially for cities of this size. We have strong multilingual medical translations, legal translation services, and the municipal housing authority has done a lot to adapt their policies and procedures to assist refugees with housing and to connect and make it a mutually rewarding experience.

The Utica City School District has done an enormous amount with ESL and is really culturally sensitive to the fact that there are some 17 different languages representing somewhere around 39 different countries in Proctor High School. The very fact that the systems that affect people’s lives on a day-to-day basis have really found ways to adapt themselves willingly and in most cases pretty effectively to the presence of refugees make this area, according to the United Nations High Commissioner on Refugees, the “town that loves refugees.” They actually had a whole UNHCR magazine devoted to highlighting what an awesome job Utica does resettling refugees.

Q: Switching gears, you’ve been at UC for 29 years. What changes have you seen?

A: There are a number of pretty significant changes in the college. One significant change is the college has expanded and it’s become much more anchored within the community. The best example of that is the Young Scholars program, which started in 1993. That program has been a really vital part of linking and connecting Utica college to the Utica community. A lot of those Young Scholars are from refugee backgrounds and I’ve had the privilege of seeing of several students who started out in the first cohorts and deciding to come here and were great students and see them go on to be very successful. We’re starting to see a change and an inflection point, a lot of people may not be aware of this, but the college’s student population is more diverse now than it was when I arrived here, and even then the college was pretty diverse. We’re now beginning to see progress in the faculty and staff mirroring the student population, and I am encouraged by witnessing this.

Q: When you retire in May 2020, what your upcoming plans?

A: Well, I am also a practicing clinician and have maintained a very limited part-time practice. Part of the reason I was skeptical about taking a job at UC is because my career game plan was that I’d be in the trenches doing clinical work and then someday retire into academia, so as it happens I stood that on its head and now I’m feeling the call of the one-on-one aspect of clinical work. I think I would just like to spend a little bit more of my time doing that.

A: I’d just like to add that the major reasons I have stayed at Utica College and what I will miss most when leaving here is the colleagues that I have who are ferociously dedicated to the well-being of students and each other, and care passionately about academic the purpose of a liberal arts education. That has been such an incredibly nourishing and encouraging environment to be in. The other thing that has kept me here that as a first generation college graduate myself, 55% of our students are first generation students and it speaks to the mission of UC. I and every colleague I’ve interacted with on a daily basis are determined to do everything we can to educate and prepare those students so when they leave here, they will be competing with people who have a long legacy of college attendance and compete on an even playing field. I feel that is truly noble work and that is what I cherish about this place and I will continue to support that mission in any way I can, even when I’m not here full time.

There are far too many people to mention but, I’ll go into my Oscar speech and say that I’m going to thank everyone who has been kind and thoughtful.