An Announcement of His Own 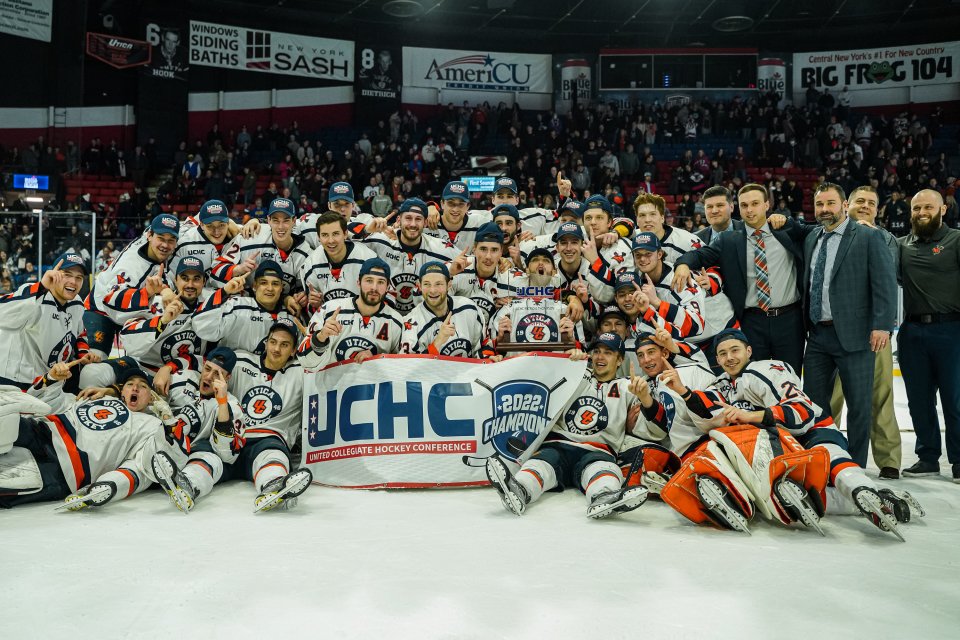 After 22 years in the box, Paul Lehmann steps down as Pioneers announcer

After a 22-year tenure as beloved announcer for Utica’s men’s ice hockey team, Paul Lehmann is stepping down after Saturday’s NCAA matchup.

For 22 years, Paul Lehmann has been the voice of the Utica men’s ice hockey team. Today, as the team prepares to take on the University of New England Nor’Easters in one of the biggest games in program history, Lehmann is also marking a milestone: his retirement. He’ll serve as announcer for the last time at Saturday’s NCAA quarterfinal game at the Adirondack Bank Center. 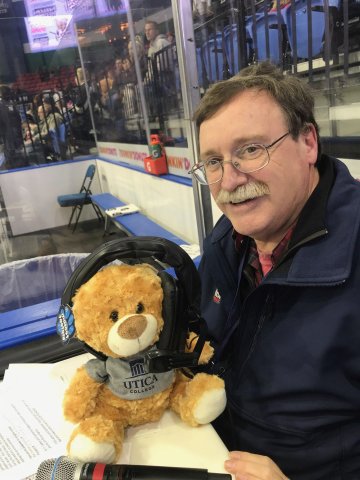 You were Director of Student Activities back in 2000, when the hockey program started. How did you land this side gig?

Back in the late 90s, I was one of the biggest advocates for establishing an ice hockey program at Utica. I figured I should put my money where my mouth is, so I offered to be the P.A. announcer for the games. Back then at the Aud, you had maybe a few hundred people at each game, tops. It was a completely different environment.

Did you have any experience in sports announcing back then, or did you just wing it?

I had done a couple Colgate basketball games, and for years I’d heard Joe Caprio do the Colgate hockey games. I stole a lot of stuff from him, and made up the rest. I used to bring a six-CD changer and that’s how we would play the music. Of course we use the Comets’ sound and lighting system now, which is much more advanced!

Did you have any idea how much the ice hockey program would grow?

It was what we all hoped for, and it’s all a credit to [Coach] Gary Heenan. He promoted the heck out of his games. I remember seeing him early in the morning outside the Aud, putting signs out on the median for that weekend’s game, and going to civic events promoting his team. He was relentless. But that’s what got us to thousands of people coming to games regularly and where the program is now.

That surprised me, too. I remember once, a few years after starting, I called in sick because I had a bad cold. A few minutes later, I got a call from the team trainer. He promised to deliver hot tea and cough drops to me in the box as long as I came in. That’s when I realized people had started expecting a certain sound, a certain style at games. They noticed when I wasn’t there.

Music has always been a huge part of Utica ice hockey. What songs are most meaningful to you?

It has to be “Two Step” by Dave Matthews Band. It’s very unique for an entrance song. You have to start it 7:49 so it builds to a crescendo when the team hits the ice. And “Chelsea Dagger,” the goal song. These traditions — they’re all Gary things. From the beginning, he really understood that it’s more than a hockey game. We’re really putting on a show.

It actually makes me proud to know how much Manhattanville fans hate us, since stoking rivalries is a big part of the announcer’s job.

What are your favorite memories from your time as announcer?

Anytime we beat Manhattanville [College]. It actually makes me proud to know how much their fans hate us, since stoking rivalries is a big part of the announcer’s job. And the on-ice proposals were always fun. I remember one in particular. It was intermission after a brutal couple of periods, and Gary was fuming. The couple takes the ice, and the team captain was supposed to skate out and bring them flowers. I’ll never forget Gary slamming the bouquet in the player’s chest and gritting his teeth [like], “Get out there and give 'em these damn flowers!” [laughing].

So, why are you leaving such a fun job?

As I become more active in my church and in my new role as general manager of the Hamilton Theater in Hamilton, there are just too many scheduling conflicts. It’s not fair to the team to have someone there on-and-off. They deserve their own announcer to be at every game, and fans deserve to know what they’re going to hear. But I’ll miss it, for sure. It’s been a really, really great ride.