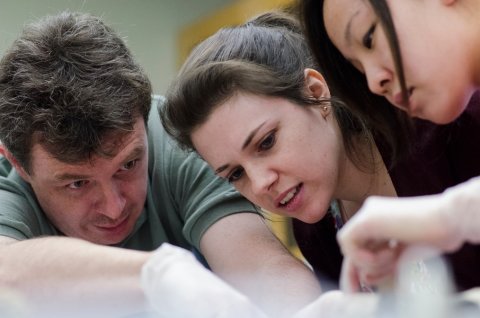 I grew up in Binghamton, New York and received my B.S. in Biology at Binghamton University (formerly SUNY Binghamton) in 1993. I then enrolled in the East/West Marine Biology Program, which is a 1-year non-degree program run through Northeastern University. I earned my M.S. in Ecology & Evolutionary Biology / General Biology from the University of West Florida in 1997. My project examined the predator-avoidance behaviors of an aquatic snail. When I finished there, I enrolled at the University of Kentucky and received my Ph.D. in Biology in 2003. I continued working with the snails during my dissertation project, focusing on factors that influence the mating system. I then moved north of the border to accept a Postdoctoral Fellowship position at the University of Lethbridge, which is located in Alberta, Canada. While the research still focused on mating systems, the study organism was very different; we examined mating behaviors and phonotaxis (movement in response to acoustic signals) in field crickets. I also had the opportunity to work as a Sessional Lecturer teaching an introductory course: Diversity of Life.

The invertebrate animals that I study are relatively easy to work with and would provide numerous opportunities for undergraduate research projects. I would encourage highly motivated students interested in gaining research experience to either conduct their own research under my supervision, or to participate in one of my projects. Some of my research goals include:

Study of life as characterized by cell organization and structure, release and utilization of energy, photosynthesis, growth and reproduction, interaction with the environment, Mendelian inheritance, genetic technology, and change over time. Laboratory experiences reflect lectures and expose students to scientific methodology, hypothesis building and testing, various qualitative and quantitative data collection and analysis.

Critical analysis of research literature and integration of diverse disciplines to foster a more comprehensive understanding of issues in the biological sciences. Prerequisites: Biology 211 and 212, and senior standing.