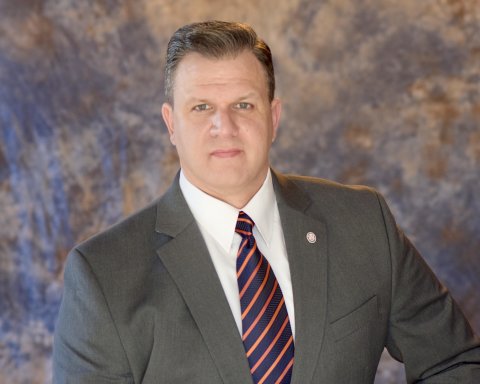 Professor Swenszkowski has been employed in the criminal justice system since 1992 and worked in a myriad of capacities such as Correction Officer, Deputy Sheriff (Civil), and Police Officer. He also served as the Police Chief of the Village of New York Mills Police Department from 2009 – 2011, Oneida County Undersheriff, from 2011 - 2018 and continues to serve the Oneida County Sheriff’s Office in an administrative capacity as the Assistant Sheriff.

As Undersheriff, he managed the operations of the Oneida County Sheriff’s Office, providing public safety services to 235,000 citizens throughout the 1250 square miles of Oneida County. He managed the human resources of the agency, internal investigations, collective bargaining, public information, agency training as well as a $40,000,000 budget. Additionally, he was responsible for over 400 sworn members of the agency and nearly 100 civilian employees. The Undersheriff has the statutory authority to serve in the capacity of the Sheriff in his/her absence.

Professor Swenszkowski has been a New York State Division of Criminal Justice certified General Topics Instructor since 1998 specializing in Firearms, Electronic Control Devices, RADAR/LiDAR, Domestic Violence, and Active Shooter Response as well as several other topics.  During his career, he played an integral role in a number of criminal justice initiatives for the Oneida Co. Sheriff’s Office such as the development of a Community Affairs Unit, Peer Support Team, re-institution of a Narcotics Unit, re-institution of a Juvenile Aid Investigator, a formalized agency training unit and the Mohawk Valley Community College Police Pre-Employment Training Program.  Swenszkowski also played a pivotal role in obtaining the High-Intensity Drug Trafficking Area (HIDTA) designation for Oneida County. This program garnered federal support for narcotics enforcement in the area and provided the Mohawk Valley Crime Analysis Center with funding for a Drug Intelligence Officer (DIO). He also assisted in the establishment of one of the first N.Y.S. Centralized Arraignment Courts through a program started by the N.Y.S. Unified Court System in 2016. Swenszkowski served on the Oneida County Juvenile Diversion Committee, tasked with addressing the revisions in the Juvenile Justice System through the N.Y.S. “Raise the Age” initiative, focusing on diversion programs for juveniles in efforts to prevent exposure into the criminal justice system.

Professor Swenszkowski has attended the International Association of Chief of Police Leadership in Police Organizations Course as well as the Leadership Mohawk Valley Program. He is a member of the New York State Sheriffs’ Association, Academy of Criminal Justice Sciences, and Professional member of Alpha Phi Sigma.  He is also the Secretary of the Oneida County Sheriff’s Law Enforcement Foundation, Sergeant at Arms for the Oneida County Law Enforcement Coalition, and board member of, Integrated Community alternative Network (ICAN), and Safe Schools Mohawk Valley. He is the current Public Safety Chairman of the Genesis Group Data Analytics Task Force and previously served on the New York State Zone 7 Counter-terrorism Team.