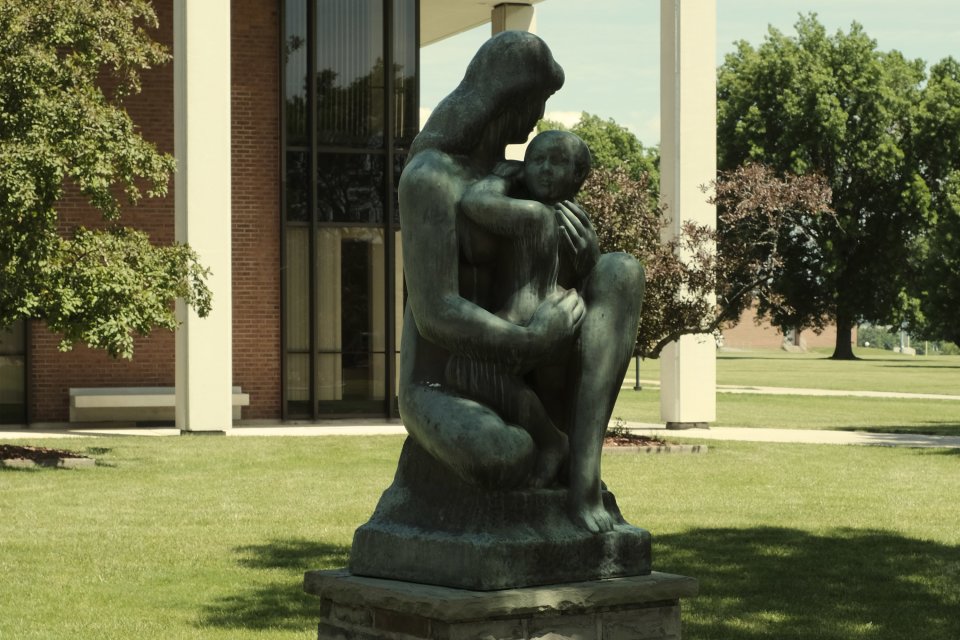 This article originally appeared in the Utica College Tangerine, September 25, 1970.

Utica College has added to its landscape a major piece of sculpture by the noted sculptor William Zorach.

Placed on the lawn between the Library Annex and the Classroom Building, Zorach's "Mother and Child" was obtained on permanent loan from Syracuse University.

Termed Zorach's "most outstanding piece of sculpture" by Laurence Schmeckebier, director of the SU School of Art, it is a variation of a piece in the famous marble group at New York's Metropolitan Museum.

Acquired by Syracuse University in 1963, the 5'6" bronze, has  been located up until now in the outdoor courtyard of the campus Lowe Art Center and was part of the well-known "Open Sky Gallery."

William Zorach was born on February 28, 1887, in Eurburg, Lithuania. After studying at the National Academy of Design and then in France, he moved to Maine to become one of our first modern painters.

After his first one-man sculpture exhibition in Cleveland in 1912, Zorach exhibited his works in art center and colleges across the country.

In SU's "Guide to the murals and Sculpture" Alexandra Schmeckebier explains, "With a feeling of repose and timelessness, the two figures are adriotly intertwined as a form, yet at the same time each is individually visible and effective from all sides."