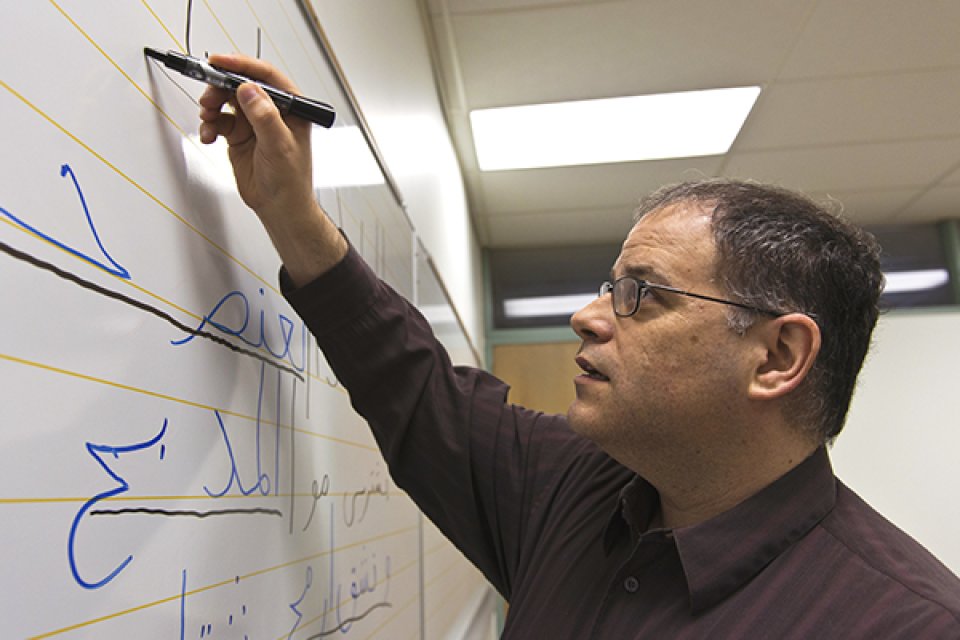 Al-Andalus is the name given to a large area of present-day Spain and Portugal by the Umayyad caliphate of Damascus, which had conquered much of southwestern Europe by the early eighth century A.D. A large swath of the Iberian Peninsula would be ruled under this moniker for the next 800 years.

It is also the cultural crucible at the very center of Juan Thomas’s work as a researcher in sociolinguistics.

“My area of research is languages in contact. For instance, my thesis at Albany was on Neapolitan and Spanish. I was interested in the relationship between these two languages.  They’re both derived from Latin, but there’s a connection even more intimate than that,” he says.

Thomas is particularly intrigued by the phenomenon of “code-switching,” when a speaker switches from one language to another within the space of a sentence or even a single word. A common phenomenon among bi- and multi-linguals, this blending can seem almost effortless and, to the uninitiated, incoherent.

“A lot of people think it’s just random mixing, that it’s just putting languages together any way you want to. But I would argue that that’s a small percentage of code-switching. To make it sound like it’s effortless, like one continuous stream of language, you have to be an advanced bilingual. You’re using different languages for different functions, and my job is to study what those functions are,” he says.

"Studies done over the past 30 years show that when someone switches from one language to the other, there’s usually a reason why."

One of his recently-finished projects focuses on a group of 1,000-year-old Andalusian poems written mostly in classical Arabic, though in the closing lines of each poem (the kharja) the author switches to Andalusian Arabic and Romance – an extinct offspring of the Latin language family that includes modern French, Italian, Spanish, Portuguese, and Romanian. Buried in libraries across North Africa and the Middle East for centuries, the poetry came to the attention of western scholars in the 1940s, though they were dismissed by many as being nonsensical and not up to the strict formal standards of Arabic poetry.

Others attempted to place these bilingual works in service to a particular cultural/political agenda, Thomas explains. “The kharjas are at the center of a debate that has been going on for 50-60 years. Some scholars believe that they are evidence of a Christian literary culture in Romance before the Muslim invasion of 711. Others believe that they incorporate some extra-Arabic realities but that they do not deal with Christian themes,” he says.

Thomas wanted to look deeper. In collaboration with one of his mentors at Albany – Associate Professor of Linguistics, Hispanic, and Italian Studies Lotfi Sayahi – he delved into the structure of the poems with specific attention to the sections where the author shifts from one language to the other.  The code-switching invariably takes place in the kharja.

“With respect to the kharjas, our first question was, is this behavior random? Is this just a random mixing of language that has neither rhyme nor reason, or is there some underlying structure here? How can we explain why Arabic is put next to Romance?  The studies that have been done over the past 30 years show that when someone switches from one language to the other, there’s usually a reason why,”  Thomas says.

Those reasons often reflect the specific circumstances of a conversation. “If you are a bilingual and you want to swear in front of someone who, for example, is a monolingual speaker of English, you may switch to Spanish to so en the force of your anger,” he explains, though he is quick to add that it is unusual for bilinguals to code-switch in the company of monolinguals. “When we talk, usually our objective is for people to understand us. We usually try to speak in ways that facilitate communication and not hinder it.”

Sometimes personal connections with a given language will prompt code-switching, such as associations with friends or family. “If you remember Christmas in Puerto Rico, and you talk about the dishes your grandmother used to make, you’re naturally going to gravitate to Spanish,” he says.

One of the primary topics of this genre and period of Andalusian poetry is romantic love, and the kharjas. Thomas is studying reflect this. One in particular is written in the voice of a young woman who, having just killed her lover, laments to her mother over what she has done.