At the forefront of the cyber battlefield 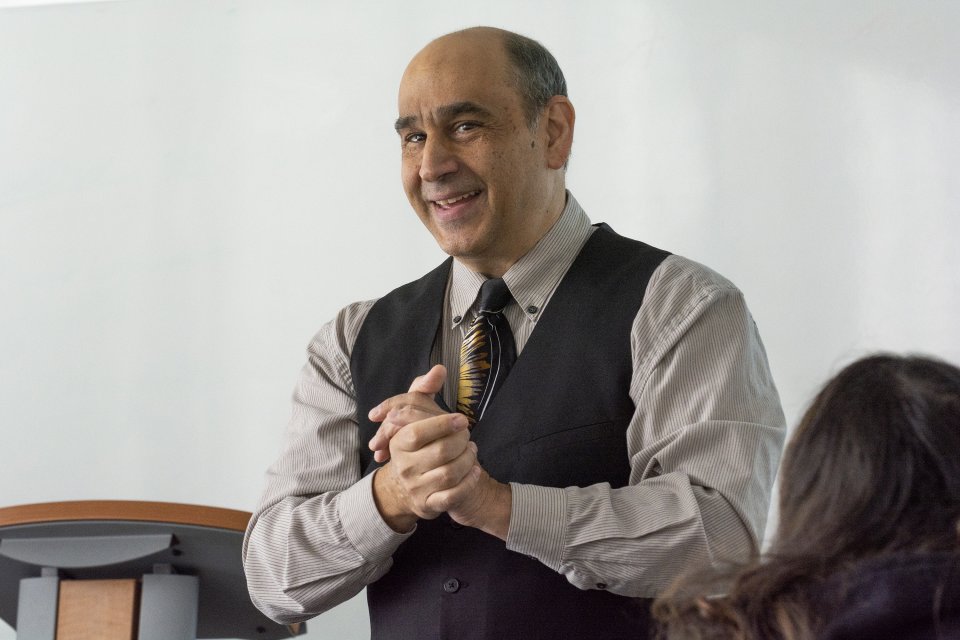 "...new technology is rolling out, new challenges, thus requiring us to keep students at a level of readiness."

The world is always changing, and with it, becoming more and more reliant on technology to keep it moving. With that comes the need to be at the forefront of technological and cyber defense. Not only does Utica College's cybersecurity program rise to meet that challenge, but has earned some prestigious certifications along the way.

The following is a Q&A with Joe Giordano, Professor of Practice of Cybersecurity.

A: I’m a local guy. I graduated from Proctor High School in 1975 and from Utica College in 1981 with my degree in computer science. My wife and I have three children, two of whom are also Utica College graduates. I worked at the Air Force Research Lab in Rome from 1981 to 2007 as a computer scientist. I started at Utica College full time in 2008. I’m a professor of practice and director of the undergraduate and graduate cybersecurity programs. While the Air Force Research Lab was amazing, the highlight of my career has been working here at UC. Being a professor is challenging, but it’s incredibly rewarding to know that I’m affecting the next generation. As a professor, I’ve had opportunities to help students become successful, work through problems, and offer career counseling. I feel very fortunate to teach something that can offer diverse students of all levels the opportunity to choose from numerous career paths. There is nothing better than receiving an email or phone call from a graduate saying “Thank you for helping to lead me in the right direction.” In my free time, I like to work out and go on bike rides with my wife. I thoroughly enjoy reading all types of books, including historical pieces, literature, poetry, biographies, and much more.

Q: Why do you think today’s students are better prepared for technology?

A: They grew up with it. First, look at somebody my age. I didn’t touch a computer until my junior year of college when I was about 22 or 23. Now, at 3 years old, my granddaughter takes a smartphone and knows exactly which buttons to hit to skip ads on YouTube so she can watch her little cartoons. Those born in recent decades are growing up with this. For instance, think of cell phones. Children and young adults always have them in their hands - this super powerful computer system, much more powerful than what I used back in 1980 and 1981 when I was a student at UC. The young people have grown up with this and are used to a laptop, a smartphone, a tablet . Whatever it is, they’re used to it, it is part of their lives.

Q: How is cybersecurity the new international battlefield?

A: I think there will always be physical warfare, but cyber is emerging as a new battlefield. I call it cyber conflict. Cyber criminals are those who create scams, fraud, spam, and anything to try to make a buck. Then you also have cyber terrorism. If a hacker group can attack a nation’s power grid or financial infrastructure, they can do a lot of damage and cause a lot of chaos. Our military is very dependent on cyber technologies for decision making, for the movement of troops, for materiel. If a hacker could get into these systems that affect decision making or logistics, they can cause a lot of havoc and chaos. There are so many ways to do it because the information infrastructure is so complicated; the more complicated, the more the advantage goes to the attacker.

"Being a professor is challenging, but it’s incredibly rewarding to know that I’m affecting the next generation."

Q: What kinds of damage can occur?

A: A sophisticated attack can take down a power grid. Russia has done it in Ukraine, thus Russians have proved that this is doable. What they did is like a science experiment on a grand level. When you look at other infrastructures, whether it is electric power, oil and gas, water infrastructure, air traffic control, or transportation, all of these national critical infrastructure sectors are becoming mostly controlled by computer hardware, computer software, networks, wireless technologies, and special purpose computing devices. Thus, there are a lot of entry points for a hacker. This could affect the water supply; power grids could be taken down and the air traffic control system could be shut off. This isn’t to say that the sky is falling and everyone should be afraid, but because we’re moving to everything being computer controlled, you have smart cities, smart traffic management system, and everything is controlled by cyber technologies. Think of a busy city or busy metropolitan area. If a hacker could get in and begin to control traffic lights or shut things down, this would be disastrous. Those are the things that can occur from the standpoint of damage. However, the big issue is the financial infrastructure. People have confidence in the integrity of the financial infrastructure. If things begin to go down and money is stolen, people will lose that confidence. This will have cascading effects, not only on the national economy, but on the international economic system as well. When the internet was developed by the defense department, I don’t think people were able to predict that it would be embedded into every aspect of the daily life of Americans, citizens, businesses, industries and military in the future.

Q: What do you see for the future of cybersecurity?

A: I see a rise in conflict in cyberspace. The more things become computer controlled and the more things go to the internet of things, you’re going to see adversaries probing and poking and just seeing what they can do. We’ve also got the increased emphasis on artificial intelligence. The applications are broad ranging. There are medical applications, financial applications, industrial manufacturing applications and military applications. We’re now in a global competition to see who is going to become the world leader in artificial intelligence. Basically, new technology is rolling out, new challenges, thus requiring us to keep students at a level of readiness. This is a tough field to be in as a career, especially to teach as a professor, because it changes so quickly. Some disciplines, while fantastic, don’t change. This is a field where you might teach a course for a couple of years and then have to totally revamp that course because the threat has changed and/or the technology has changed. I can’t even go semester to semester without looking at my course. It’s a challenge not only to teach the program, but to direct the program. Also, for new teachers in the program, it’s a tremendous challenge. Luckily, we have some tremendous people here to teach and handle the challenges.

Q: How important are the certifications we recently received?

A: They’re the gold standard. Those certifications for both the bachelors and master’s degrees are what let a student or prospective student know that we are meeting the stringent requirements set forth by the by the U.S. government, meaning the National Security Agency and the Department of Homeland Security. It’s proof that the program is teaching relevant material and is up to date, timely, and meets their criteria for excellence. In business and industry, graduating from an NSA Designated Center of Excellence is a noted credential. We provide students that graduate from the program with a certificate saying that they graduated from a Center of Academic Excellence.