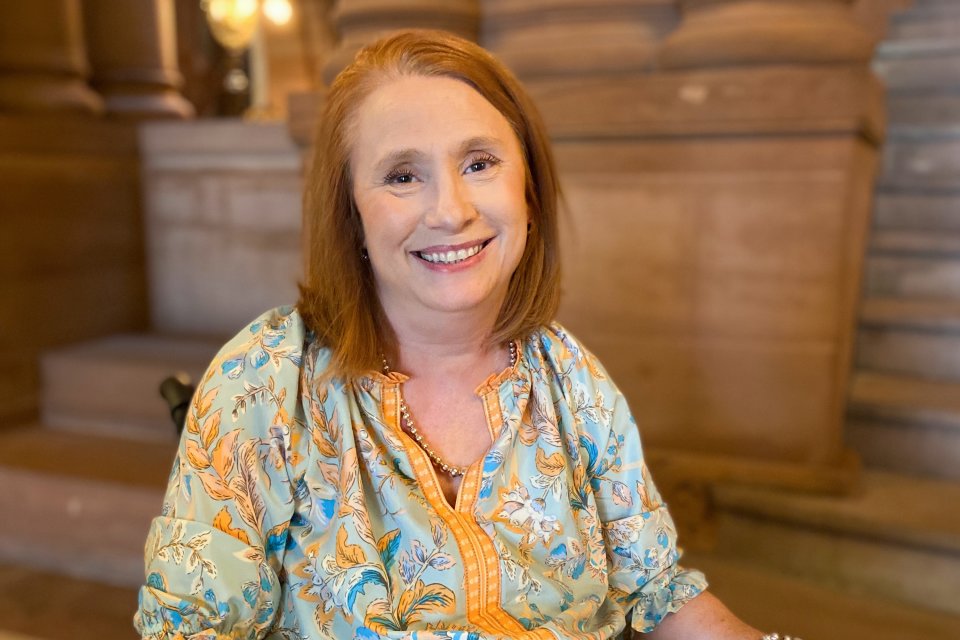 A fluke accident as a teenager changed the course of Kimberly Hill's life. Now, she's using her experience to fight for others and dispel misconceptions about people with disabilities as New York State's first-ever Chief Disability Officer.

It was the tail end of 1988. Kimberly Hill was a high-school junior in New Hartford, NY, spending the final hours of the year with friends at a New Year's Eve party.

With moments until midnight, the crowd of teenage party-goers began counting down, the room's energy rising and culminating with frenzied jumps and cheers as the clock struck midnight.

Hill, physically caught up in the throng of friends, found herself knocked to the floor, suddenly unable to move. Improbably, she had broken her neck.

"It was the definition of a fluke," says Hill, who recalls the months following her accident as a blur of hospitals, surgeries, and rehabilitation. She spent nearly eight months in the hospital – the first two months were spent at Upstate Medical Center in Syracuse, NY and then the final six months were at Burke Rehabilitation Center in White Plains, NY. It was during this time that doctors and physical therapists helped her recover, learn how to adapt to a wheelchair, and transition to her new life as a 17-
year-old with a disability.

She didn't know it then, but the implausible tragedy would set Kimberly Hill on a path to become one of the most powerful advocates for people with disabilities in New York State. As a student at Utica, where she enrolled barely 18 months into her recovery, Hill found a passion for state government, and honed the skills that would propel her into a decades-long career in the New York State Assembly — all while refusing to let her disability get in the way.

"Kim has defied being pigeon-holed," says Jim Murphy, Hill's former government professor and mentor. "Both as a college student and now as a leader in Albany, she has never let her disability define her."

Kimberly Hill had just begun to explore college options when her accident altered everything. Plans, which she had hoped would include college in New York City and a career in the merchandising industry, were put on hold indefinitely. Like so many other parts of her life, the future Hill had carefully plotted out as an adolescent now seemed nebulous, requiring myriad concessions and compromises due to her physical limitations.

But, in the summer of 1989, a visit to then-Utica College of Syracuse University opened up a new possibility. Since the accident, Hill's parents' support and advocacy had been essential in helping her recover and cope. Her mom, Barbara, had practically made Hill's care her full-time job. The entire family knew that finding a college nearby would allow Hill to continue to rely on her parents' support. Still, Hill was not interested in commuting. Getting the full college experience, she knew, meant all the trappings of college life: living on campus, eating in the dining hall, attending parties with friends, and hanging out on the quad on spring afternoons. Despite all the changes she'd endured over the past several months, Hill wasn't ready to give up on that vision.

Her visit to Utica had restored her hope. Living so close by, Hill realized she had discounted the local college, but now, after a tour and multiple assurances that adjustments could be made to the physical campus to ensure accessibility, Hill felt she had found the perfect fit.

"[Utica] was 10 minutes from my house, had several programs I was interested in, and it just made a lot of sense," she says. By then, her career goals had moved away from merchandising and toward journalism and public relations, two programs for which Utica was nationally known. Soon after her visit, Hill applied and was accepted, declaring a PR and journalism major with a minor in government.

“My dad had worked in state government for a long time, so I had the idea I wanted to do something in that realm,” she recalls.

Her campus living arrangements were falling into place, too. With help from then-Director of Residence Life Mark Kovacs and some tweaks by facilities to make her route to campus buildings more accessible, Hill settled into an apartment on the ground floor of Alumni Hall, where she would live for the next four years.

Just as she had hoped, Hill was enjoying life as a typical Utica student, thriving socially and academically.

In the classroom, she excelled in courses in communications and government. Government Professors Jim Murphy and Richard Emmert served as valuable mentors.
In fact, it was in one of Emmert's classes that Hill met one friend in particular. A year her junior, fellow government student Mike Ridley '95 was as politically minded as Hill. They grew closer while working on future Congressman Mike Arcuri's winning bid for Oneida County District Attorney in 1993.

"We just hit it off," Hill says. "Our interests were aligned."

Professor Jim Murphy has no trouble remembering Kimberly Hill, despite the 30 years since she first entered his classroom in DePerno Hall.

"She sat in the front row on the right," he recalls. "She was very soft-spoken, gracious, understated. And she did great work."

In Murphy’s evening course on election campaign management, Hill's "brains and talent" impressed him, he says. Then a junior, Hill talked with Murphy about her career aspirations, and Murphy was in the unique position to help.

At the time, Murphy himself was working in the state legislature as director of the intern program. The Assembly was always looking for talented interns to join the staff, and Murphy was happy to provide recommendations from among his students, many of them also acolytes of legendary PR Professor Ray Simon.

Hill, he knew, would thrive in a position within the Assembly’s Communication and Information Services Department, which required deft writing skills and a "certain temperament under pressure," he explains. "To find such a mature temperament in someone that young is rare, but Kim had it."

In January 1994, at Murphy's recommendation, Hill interviewed for and was offered a job that seemed the perfect marriage of her interests and education; doing writing, research and graphic design for the democratic majority.

After graduating from Utica in the spring of 1994, Hill moved to Albany and began work. She was soon joined by boyfriend Mike Ridley, who spent a semester commuting back and forth from Utica before graduating in December, and soon found a position of his own within the State Assembly as well.

By 1998, Hill's career took a fortuitous turn when she was approached about an open position within the Assembly, as Director of the Task Force on People with Disabilities.

The Task Force focused on people with physical and sensory disabilities, and the Director, she learned, would help create and evaluate initiatives for people with disabilities living in New York. The opportunity to help others through legislation was too appealing to pass up.

“I knew I would have the ability to make changes to help people live more independently, more inclusively in the community,” Hill says.

Hill was offered the position, and over the course of more than two decades, became one of Albany’s most vocal and most effective advocates for New Yorkers with disabilities. Most notably, she worked with Assembly members to advance legislation related to the state’s Nursing Facility Transition and Diversion Waiver, which allows seniors and people with physical disabilities to have more control over the services they receive while living in community-based settings. In 2002, she championed the passage of the Most Integrated Setting Coordinating Council, ensuring that New Yorkers with disabilities receive care and services in the most integrated settings appropriate to their needs. She served with the Assembly’s Standing Committee on People with Disabilities as their principal analyst, and helped plan more than 24 annual Legislative Disabilities Awareness Days, which brought hundreds of people with disabilities, their families, advocates, and legislators to Albany each year.

Her decision to accept the Task Force position, it seemed, was a solid one. Hill was more than a mouthpiece for disability rights. On behalf of New Yorkers with disabilities, she was a force.

By the summer of 2021, Kimberly Hill was busier than ever. As was the case for nearly every population across the globe, the COVID-19 pandemic had created unprecedented obstacles for people with disabilities in New York.

Among many others, issues related to the home care industry were top of mind for Hill, as the pandemic was exasperating an already struggling home care and direct care industry.

“When you rely on home care to get up and be independent each day, not having that help can be devastating,” she says.

Adding to the upheaval, New York’s longtime governor, Andrew Cuomo, had recently resigned, and state government was in flux. The incoming governor, democrat Kathy Hochul, took office on August 24, 2021, and, according to Hill, brought with her a fresh perspective on disability rights and employment inclusion.

“I admired how Governor Hochul took office ready to rebuild and make these issues a priority,” she says.

Part of Hochul’s agenda was the creation of an entirely new office supporting people with disabilities, which would be led by a new position: the state’s first-ever Chief Disability Officer.

When news of the job opening crossed Hill’s desk, she first thought of her family: Mike Ridley, her partner of more than 30 years, and their children, Michaela, 19, and Alex, 14.

“I knew, immediately, that this would be a dramatic career change, and I had to weigh the work-life balance,” she says, though she couldn’t deny the job’s extraordinary appeal.
“The job description reflected everything I was doing for the Assembly, but on a statewide level within the Executive Chamber. It represented the chance to make some real change as part of an administration deeply committed to these issues, and I felt like I needed to explore that.”

After a “fantastic” interview process, Hill got the call she’d been hoping for.

“I may have screamed a little bit,” Hill says with a laugh, recalling the moment she learned she had been selected as New York’s first-ever Chief Disability Officer.

Her new boss, Governor Hochul, was excited, too. In a ceremony in February 2022, Hochul praised Hill as a “superstar” for her long history of advocacy work.

“She has the demeanor and those existing relationships that will benefit us,” said Hochul in her remarks. “The bar is very high for you, Kim, but I have no doubt that you’ll meet it.”

The Future of Disability Rights

Even with her new position’s high profile, Hill’s work, then and now, has always focused on two fundamental goals: inclusion and independence for people with disabilities — both of which Hill says start with employment.

In an ongoing effort to change those perceptions, Hill and her office are working with state agencies and the dozens of service providers and not-for-profits that play a role in the employment of people with disabilities.

And despite the many challenges still facing New York’s Chief Disability Officer and the people she serves, Hill can’t help setting long-term goals for her office—and the state.

“My real hope is that New York becomes a leader in disability policy and integrating people, so everyone feels included and valued in their communities,” she says. “That’s really what it’s all about.”