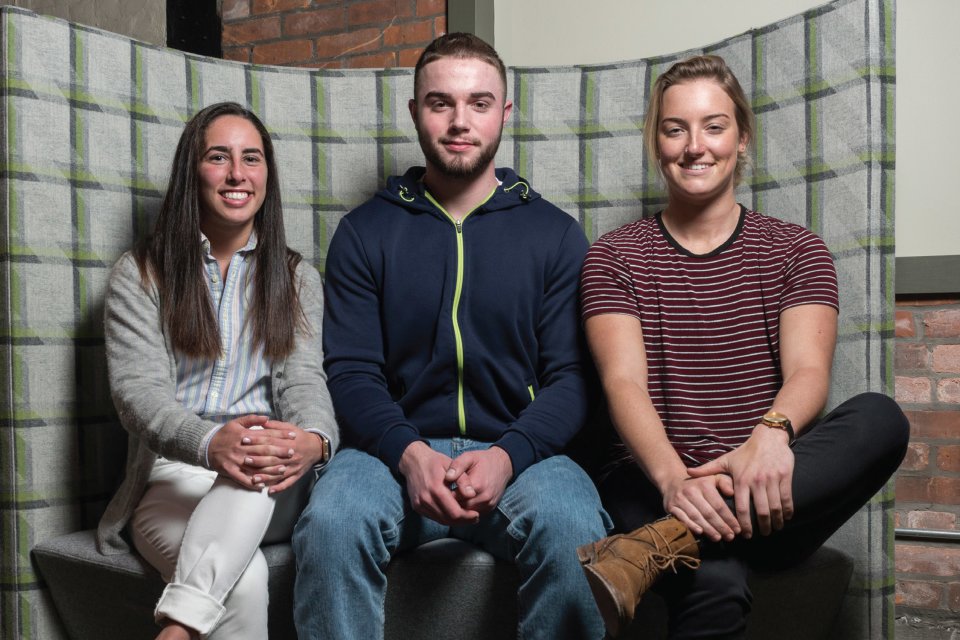 On the evening of December 7, 2016, Utica College’s Carbone Auditorium looked more like an episode of NBC’s Shark Tank than a college classroom.

As part of Brett Orzechowski’s Entrepreneurial Media class, three student teams presented their own media-based products and services before a panel of judges. Local media professionals and a virtual audience (via live stream) served as “sharks,” evaluating the pitches as potential investors—and determining students' final grades.

The presentations were the culmination of a whirlwind semester filled with content pitches, feasibility analyses, beta testing, and copious deadlines, designed to replicate the real challenges a startup might face in turning a clever idea into a profitable business.

The winner: SucSeed, a niche-market nutrition app that provides meal plans tailored to those with specific dietary issues. Despite being the final project in Orzechowski’s course, the December presentation was just the beginning for Team SucSeed; students Emily Coope ’17, Becky Vennero ’18, and Adam Westbrook ’20.

The original idea for SucSeed was the brainchild of public relations major Becky Vennero ’18.

“I’d used My Fitness Pal and others to track my meals for the day,” says Vennero, referring to the popular smartphone app that allows users to input their daily food choices. The app acts as a food journal that counts calories and provides detailed nutrition information on thousands of food items.

“I’m usually really busy, so it was easier to plan my meals and snacks before I’d grocery shop for the week,” she says. “I thought, ‘Why isn’t there any app that does this for me?’”

“Forming teams was completely in the students’ hands,” he says. “They had to pitch their ideas and their skill sets to one another, and make a decision based on where they could add value.”

The objective was to help students build the confidence starting a real business requires, says Orzechowksi, though he admits: “The first couple weeks of the course are like an awkward high-school dance.”

Vennero’s meal-planning app (the name SucSeed would come later) attracted classmate Coope ’17, a business management major, UC hockey player, and CrossFit trainer with a background in nutrition. The duo soon recruited computer science major Westbrook ’20, who was key in developing the technical side of the app.

“We all brought different skills to the table,” says Coope. “We knew that building the right team would be crucial to how the rest of the semester went.”

Though Entrepreneurial Media was first offered at UC in fall 2016, Orzechowski spent several years co-teaching a similar course at Quinnipiac University in Connecticut. The curriculum is fast-paced, and forces students to “solve real problems, rather than deal with hypotheticals from a textbook,” says Orzechowski. Throughout the course, which is open to all majors, students learn the basics of start-up culture, digital marketing, and entrepreneurship funding, all with the high-stakes presentation looming at the end.

“Students quickly learn that they’re operating without a net,” he says.

Once the team was formed, Vennero, Coope, and Westbrook had little time to get acquainted. Almost immediately, they were required to produce a market analysis, financial statement, and finally, a business plan, which they learned would undergo three revisions before the December presentation.

At the same time, the original idea for the nutrition app began to evolve. With guidance from Orzechowski, the team decided that their product would cater to those with specific food allergies or intolerances. This added feature would help the app stand out among similar products, since the team’s research concluded that people with food restrictions (such as gluten and intolerance, nut allergies, or lactose sensitivity) were largely ignored by the market’s current offerings.

“Professor Orzechowski encouraged us to ask ‘What’s the value we’re bringing with this product?’” Vennero recalls. “We realized that targeting a niche market would set us apart.”

The next order of business was to refine their marketing pitch—and give their app a name. During one of many late-night meetings in the UC library, Coope remembers brainstorming.

“We were messing around with so many crazy names. We liked that ‘seed’ sounded healthy and natural, and it just went from there,” says Coope. “We settled on ‘SucSeed,’ and it just clicked.”

Towards the end of the semester, Orzechowski switched the course’s focus to prepare the students to present the ideas. He brought in communications professor Carol Downing, who gave the class a crash course in public speaking and evaluated their current pitches.

“I said, ‘Carol, rip them apart,’” Orzechowski recalls. “At that point in the course, I knew they were prepared to take negative feedback and see it as constructive criticism.”

For Team SucSeed, the lessons were more than constructive. In working with Downing, they learned to simplify their pitch, emphasizing the program’s top features instead of focusing on more technical details. They developed graphics to simulate the actual experience of using the app, which helped make SucSeed’s functionality crystal clear. They succinctly explained the problem with nutrition apps currently on the market and how SucSeed could help fill the void.

In those final weeks, the team’s presentation underwent “constant tweaking,” says Orzechowski. “But you could see their confidence building each time they presented because they were taking in all the feedback.”

On presentation day, the team was slated to present last. As they watched their competitors present, Westbrook recalls feeling the anticipation build. “I was going through my notecards over and over again,” he says. “But when we got up on stage, it just kind of flowed.”

Coope recalls reading the non-verbal cues of the judges as they explained the prototype. “Lots of head nods and smiles,” she says. “We felt pretty confident after seeing that.”

Sure enough, after a brief deliberation, the judges announced SucSeed as the first-place winner.

In addition to receiving A’s in the course, shortly after the final presentation, Team SucSeed was approached by a local businessperson with a surprising proposition: a purchase offer.

“This person saw real value in their idea and made a cash offer,” says Orzechowski. “I think their mouths kind of dropped at first, but then they looked at it from an intelligent, financial perspective.”

After much consideration, the team turned it down.

“We saw more value and potential in SucSeed than what this person was offering,” says Vennero. “We felt like we could do more with the idea if we continued to pursue it ourselves.”

And so they have.

On April 1, the team competed in the Mohawk Valley Collegiate Business Plan Competition, where SucSeed earned second place in the IT Software category and qualified for state competition in Albany on April 28.

While they didn’t place in States, the team received positive feedback from the judges and their peers, which inspired them to push on. Since early 2017, they’ve been working to refine SucSeed with Ryan Miller, director of thINCubator in downtown Utica, who served as a judge during the December presentation. At thINCubator, Miller and his colleagues help aspiring entrepreneurs take their ideas to market.

“After the final presentation, Ryan approached us and said ‘If you guys want to pursue this, let’s chat,’” says Coope. The team jumped at the opportunity, and began meeting with Miller at thINCubator on a biweekly basis.

“Working with thINCubator has been awesome,” says Coope. “Ryan connected us with a web developer, and that’s been a huge help. It’s cool that we’re taken seriously and given the opportunity to see where this can go.”

Agrees Vennero: “We went into this not knowing much about start-ups or how entrepreneurship works,” she says. “Now we’re going to business meetings a few times a week and making decisions about real money. It’s been a huge transformation.”

And for Orzechowski, that’s precisely the point—and why he’s working to establish an entrepreneurship minor at UC.

“Entrepreneurship skills are transferable in so many ways,” he says. “Working on a project like this, you see students grow as professionals, and as people. It puts them in a position to realize what they can do.”