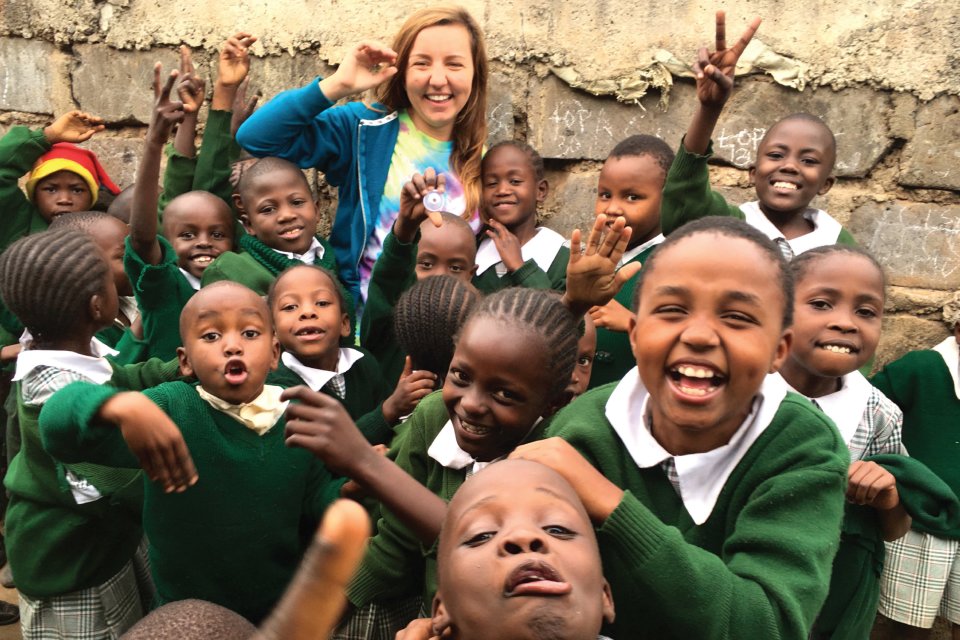 Viktoria Yudchits ’18 shares photos and stories from her life-changing summer in Kenya.

In July 2016, UC senior and biology/philosophy dual major Viktoria Yudchits traveled to Kenya, where she spent three weeks volunteering at a school for orphaned children. The experience not only served as catalyst for her honors thesis on healthcare in Kenya, but also inspired Viktoria to pursue more volunteer work in the country. In fact, she’s planning a trip back in the summer of 2018.

Here, she shares her favorite photos from the experience and memories of the children who changed her perspective on “everything,” she says.

It all started with a classroom discussion in “Introduction to Ethics” with Dr. Riddle during my freshman year. Dr. Riddle posed the question: Do we have an obligation to help the global poor? My classmates and I voiced our opinions, and then were assigned a paper to further explain our stance. In my paper, I argued that, yes, we all have an obligation to volunteer and help the poor around the world.

I’d always wanted to visit Africa to volunteer, but after that class, I grew impassioned and more determined than ever to make this goal a reality. I did some research online and found Agape Volunteers, a non-profit group that focuses on humanitarian work in African communities. I applied, and within a few days, it was official: I would be spending three weeks in Kenya during the summer of 2016. My beliefs from ethics class were no longer just words on paper.

My placement in Kenya was at a school where I would teach kids between the ages of 9 and 11. To say that my first day there was a culture shock would be an understatement. Reading and seeing pictures of what goes on in a third-world country is one thing; seeing it firsthand is a completely different experience.

Nothing could have prepared me for the conditions the children lived in, how little they had, or the abuse they suffered at the hands of their school administrators. It seemed like the teachers would find any reason to punish the students, and punishment often involved a wooden paddle. On that first day, from outside an office door, the other volunteers and I heard screams from a girl who was being hit for filling up her notebook and asking for another. Why in the world would a student get punished for this?

Some of the other volunteers were too overwhelmed and left for home early. And honestly, I wanted to leave, too. But then I reconsidered. I didn’t come here to make myself comfortable, I thought. I need to help these kids in some shape or form.Leaving them is only going to make it worse.

The children stole my heart from the first day. I had never met kids who were so polite, respectful, responsible, eager to learn and grateful for everything they had. Despite their poverty, they realized that there were others who had it worse. There was a song they liked to sing and I’ll never forget one of the lyrics: “Let the poor say I am rich.”

I spent most of my time teaching the basic subjects, such as math, science, social studies and English. Resources were scarce—their books were outdated, and students had to take turns with supplies, but they had such a passion for learning. They always asked for more homework at the end of the day.

The best part of the day was recess. In a field near the school, I introduced the kids to games like “Red Rover” and “Duck, Duck, Goose.” Their laughter was contagious. For some of the games we played in class, I would bring in small treats, like candy or pencils with colored erasers, and it was incredible to see how something so small caused their faces to light up. I grew more attached to them each day.

After a week of teaching, the weekends were for exploring. Kenya has so many beautiful places, and I had the amazing opportunity to go on safari in Maasai Mara, where I saw the “Super Seven” animals: lions, elephants, buffalo, leopards, rhinos, cheetahs and the African wild dogs. At one point, the lions were so close to our van, we could almost reach out and touch them (tip: do not reach out and touch them). I watched a cheetah hunting an antelope. From the zebras and giraffes strolling around, to elephants playing in the mud, to the sound of hyenas on the prowl at night, being so close to wildlife was like nothing I’d ever experienced before.

At the end of the trip, I had a really difficult time saying goodbye. I became so attached to these children so quickly. I knew even before I left that I needed to return. I am currently planning my second trip with hopes to stay there for a couple of months. Not a day goes by when I don’t think about the kids, and I can’t wait to be reunited with their happy faces soon.

Viktoria Yudchits is currently a senior honors student at Utica College majoring in biology and philosophy, with minors in chemistry and healthcare ethics. In March 2018, she was one of 13 college students nationwide selected to participate in an ethics seminar at the prestigious Georgetown Institute for the Study of Markets and Ethics, where she presented her research on healthcare issues in Kenya. She plans to attend medical school after graduating in May 2018.