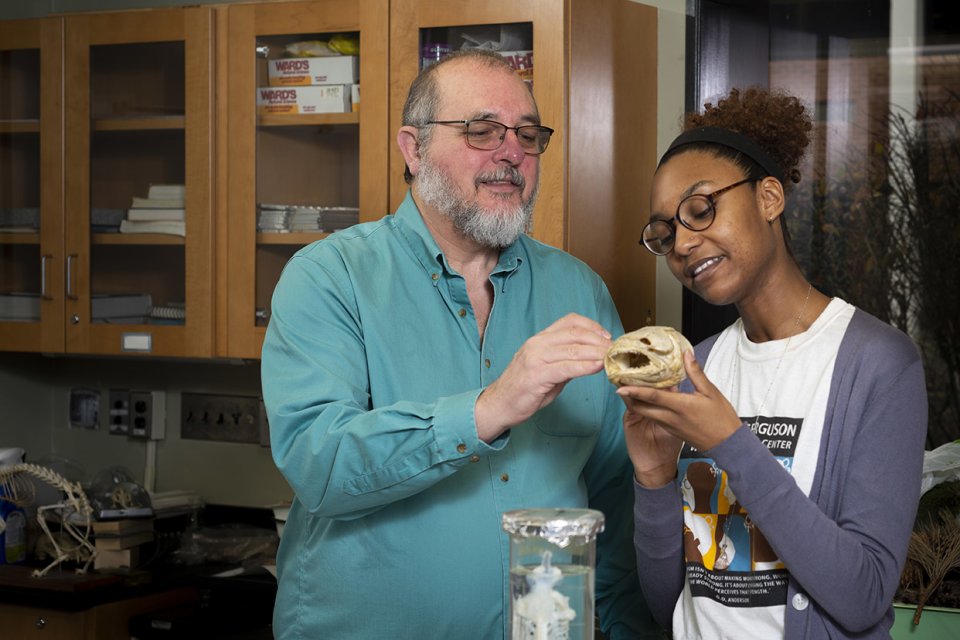 My major is mostly biology but there’s a little bit of psychology that I have to do. I like the combination – that’s what kind of drew me towards the major.

Basically, animal behavior is a combination of biology and psychology, as I said. We also delve into evolutionary history and how we think animal act in certain ways and why that may or may not benefit them. So it’s more like a new field that’s developing, and it’s largely research based.

Some other things that are cool about the major. I have a class where our lab is in the zoo, so every Saturday we go to the zoo and we do some things there. So that’s been fun. And one of my labs we worked with crayfish and crickets, and did a ton of those classical experiments with them, so that was fun too. So it was kind of like researching why does this animal do this, and then putting all the pieces together.

I think it’s more like, both humans and animals have nervous systems, so we all have these neural connections. Behaviorism stems from cognition, so the psychology I got into was research-based, so I got into that. Sensory systems, and how that played a part. So that’s what tied into it for my education here.

I’m from Pennsylvania. I’m originally from Philadelphia, but I graduated from this town called Pottstown, about 45 minutes away from the city. I originally came to Utica because they recruited me for track. I didn’t end up running track here, but I saw they had animal behavior as a major, which I really liked because I thought it was interesting and I saw a lot of other schools had it for just like a class or a minor. This was one of the few places I saw where it’s a major and not just the pre-vet type of thing.

That’s what drew me here, even though I didn’t run track, and I saw that they accepted my college credits that I had from high school, and it was one of my most affordable options, so it was kind of like my perfect deal back then, so it worked out. I got some scholarships, and that definitely helped out a ton for keeping me coming back.

Academically, I really do like my studies, I enjoy what I’m studying. Social scene is really fun, too, like getting to know different people. I am a programming intern here at the Womyn’s Resource Center. I basically run events that are basically pertaining to women’s empowerment. I am involved in a couple of organizations, but this one is a step up from that. We have paid staff at the center, and we have an actual place where our organization can meet and things, so I really liked what the center stood for and I wanted to advocate my own personal beliefs on campus. So I found that this is the perfect place to do this. There’s definitely some history here, too. I love it here. It’s definitely a safe place, and I love the people I work with. Just a great experience here.

I think it has to do with the women I grew up around. I grew up with a lot of strong role models in my life that taught me to volunteer my time and services, to make people feel better, to educate them in ways that can help benefit other populations. So I kind of was always taught that empathy, to just go out in the community and help others. That’s been important to me, and I still do that today. Make a difference, small or big. If I throw an event and like a couple of people come, which has happened, as long as people learn something, I feel like I’ve done my job at the end of the day, and I feel satisfied in that.

I’m still between whether I want go to vet school or just continue in grad school. I don’t really like the route of grad school because it’s very research oriented, and I found that that’s not really what I want to do, but at the same time I’m not sure if I want to go to vet school. So, since I’m graduating early, I’m taking that time to discover what I want to do with my next steps and my future. But honestly, if I’m working with animals I’m going to be happy in life. And since I have experience with the zoo lab I have right now, I can always do something in the zoo, just to start off. But my dream goal is like, own a big cat sanctuary and help big cats. I love big cats, cats in general. But that’s my dream, to purchase a couple of big cats and have the area and take care of them, advocate for them. That would be ideal for me. Just building up the steps to that, which takes a lot, because I have to build experience in animal care, and all the certifications and what-not. There’s a bunch of avenues I can go to – it’s just picking which avenue I want to go to right now.

I feel like, within animal care, especially sanctuaries, zoos, and things like that, it kind of automatically connects with conservation activism, because most of those animals being brought in are either threatened or endangered species, so it’s kind of hand in hand the way conservation and animal care work together. I definitely would like to do something with conservation, that would be great for me.

I love big cats, but I think my favorite big cat would be the leopard. They’re cute. They’re like big domesticated cats. They don’t have leopards at the Utica Zoo. They have lions, they have lynx, they have a serval there, too, but she was kind of bratty, like a cat, but she’s cute. Doesn’t really like humans like that, which is kind of typical for wild animals.

I love it here. It’s definitely a safe place, and I love the people I work with. Just a great experience here.

Hopefully I can do some research with Dr. Buchanan before I leave. He’s my advisor, and he teaches a lot of my classes. He was mentioning one of his future steps, and I said that sounds so cool, and he said, yeah, we can definitely squeeze you in before you go. And I said I would like that. So hopefully we can get that on the roll, working with his salamanders.

Definitely the zookeeping class I’m taking now is one of my favorite classes. I had an animal behavior class I took, and I found that and the lab to be very interesting and helpful. Working with those different animals hands-on was helpful, too. Honestly, my upper level classes, the ones that are closer to what I’m actually interested in, that’s what I found. I also like my sensory classes that I took, because I think sensation is interesting and how that connects with the neural system. It’s just really cool.

We have, outside of our academics, you can definitely do a lot at Utica. There are a lot of options for just being involved in the campus that can get you experience and you can have a lot of fun doing that. Yeah, it’s great. We have a lot of great programs here, but we also have a lot extracurricular things that can really get you engaged in a lot of different avenues within the Utica College community and also within the Utica community. So, I think that’s really cool, and that’s what I feel people are geared towards when they come to school here. They’re attracted to that when they visit.

Through the WRC, have connections with Planned Parenthood in Utica, so I engage with them. I know a lot of people who do a lot of community service, to like do clean ups and whatever. We have alternative fall breaks that we can do. I know there’s like a lot of clubs and organizations that do engagement, in the schools, they’re interested in working with teens, that are high school students.

Last semester, we did a clean up on the campus. We did the highways around the school. I thought that was really cool. We met with people that are from the community. They were just telling us how they’ve been doing this for X amount of time, and engaging with them and just getting to know different people who are passionate about the same thing.

We have a wide background of students that have different talents and abilities. That diversity can have a lot of impact on their future and everything. So there’s a lot of commitment from students that want to do good not only for their sake but for the betterment of the college community in general. I feel like the students here are really engaged. They care about the campus and what events they like to produce. But they also care about their future careers. I know a lot of people who have done amazing things with their degrees from Utica, just doing great for themselves.

Scholarships give a lot of people opportunities that may not have had the opportunity to come to college without them. So it definitely opens doors for people who come from lower socio-economic class, but still did great in school and are passionate about moving forward. Even for people like that – I’m one of those people – it definitely helped me and helped a lot of other people that I know. Because of that, we have unique diversity and different thought processes that are on this campus because of that.

What I recall about these four years are all the different events. The banquets from all the different organizations that bring in speakers that are enlightening. We honestly learn so much from these extracurricular things outside the classroom. The amount of work that students put in outside of their classes to put on these great events and reach out to other students is just … very impactful. You really do come out learning a lot. It’s great. Events bring us together as a college community. It’s a wide variety. I feel like everyone can find something that they’re interested in and stick with that club, get to know new people. It's definitely cool.

I’ve made good friends here. They’ve come and gone, but for the most part, yeah, there are definitely some lifelong friends that I’ve made.

Dr. Buchanan and Dr. Kurtz were definitely there for me and very supportive and helpful in my development here. They motivated me and they’re just great human beings in general, so engaging with them on a personal level was great, to know them, too. I would say those two really stood out for me. 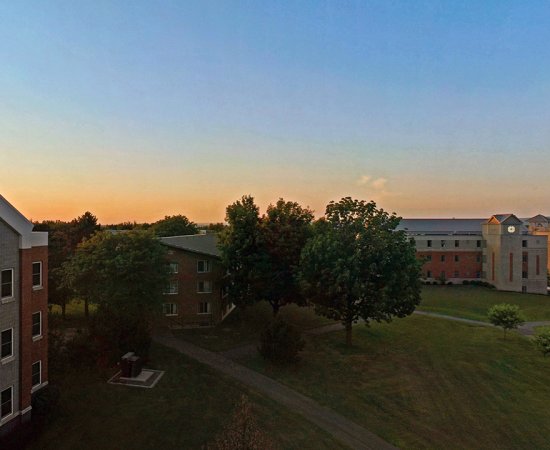 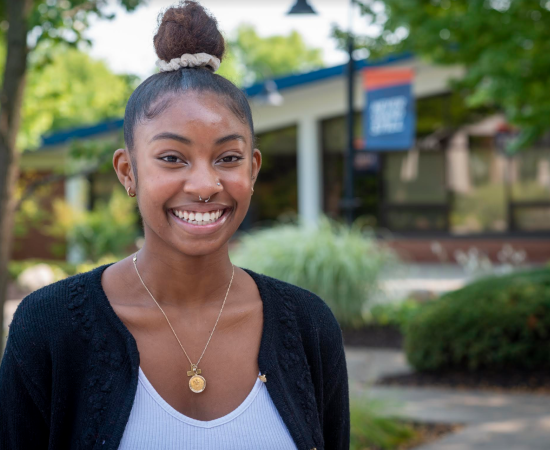 Solana Russell ’22 spent the summer using her voice to protest police brutality and social injustice. But it was a...

Utica College has joined with five other area colleges to form The College/Community Partnership for Racial Justice Reform. Hamilton College,...
All Stories