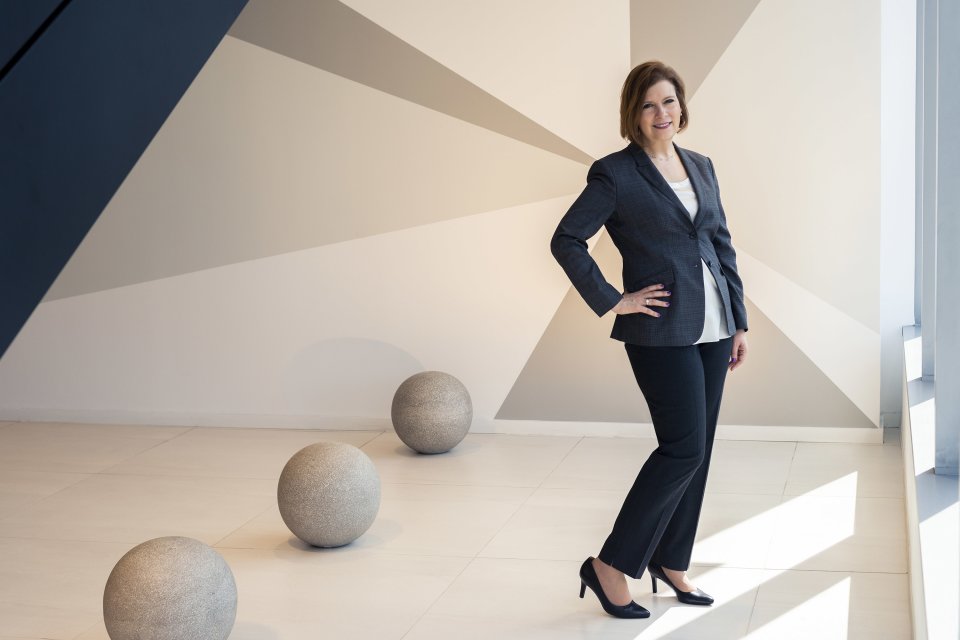 As a partner at the prestigious, multinational PricewaterhouseCoopers (PwC), Heidi Hoeller ‘91 worked with high-caliber clients at the largest accounting firm in the world.

And even as a child, she was ready to take on the business world.

Growing up in Utica, New York with a bookkeeper mom, Heidi says playing was serious business for her, often setting up her own little office at home to follow her mother’s example. With a playspace office organized and ready for the tasks at hand, it’s no wonder Heidi knew exactly how to organize her educational path with a degree in accounting.

“I knew accounting was a good starting point to being a business person, and I always felt I was a bit of an entrepreneur.”

When it was time to chart that path, a semester away at a state university wasn’t working for Heidi. So, she once again looked to her mother who suggested she “give it a try” closer to home at Utica College.

“I thought I couldn’t afford it, but they offered me a great financial aid deal,” she says. “So I transferred because after the scholarships. I was paying the same or less than I was at the state school.”

It didn’t take long for Heidi to find the small class sizes and one-on-one focus from her professors made a big difference in her learning environment.

When she first started at UC, Heidi says she knew she wanted to go into accounting, but wasn’t quite sure at that point if public accounting was right for her. After some discussions with her adviser, Heidi was convinced that many start their careers in public accounting before making their way to the private sector.

“One of my professors taught auditing and at the time, I didn’t even know was auditing was,” she says. “I took his course. He had worked at Coopers & Lybrand and told us all about how it was to work there.  At the time, it was a ‘Big Six Firm.’ He told us to set our sights high and encouraged us to go for interviews, I really learned a lot about the big firms, which I didn’t even know existed before.”

Though she didn’t make it into Coopers & Lybrand the first time around after graduation, she began working with a small firm and two years later went on to get her CPA license. It was after this that she was speaking with one of her former professors, and the rest of her career began rolling.

“I told him I really wanted to get into Coopers & Lybrand. He made some phone calls and got me an interview. I went to the full day interviews, and I got the job. He and my auditing professor followed up with me throughout my career to see how things were going, but I stayed the whole time. I owe my career to those professors at Utica College.”

Coopers & Lybrand and Price Waterhouse were both firms that had histories dating back to the 19th century. In 1998, they merged to become PricewaterhouseCoopers LLP (PwC), which they remain to this day. As of 2017, it was the fifth-largest privately owned company in the United States.

After 26 years, Heidi retired from PricewaterhouseCoopers in June 2019 with an incredible career behind her. Before retiring, she was a Partner in PwC’s National Quality Organization, as well as the Partner leading diversity and inclusion for Auditing Services, Methods and Tools (ASM&T), a group of roughly 120 professionals.

Prior to being in PwC’s national office, she served as a Financial Services Partner within PwC’s Northeast Insurance Practice in the areas of both integrated and non-public audits, working on a diverse portfolio of clients that included global insurers, regional insurers, separate accounts, and captive insurance companies.

As an auditor, she was working in the national office in recent years - a long way from the Syracuse office she began in, kicking off a journey that would take her around the country and the world.

Throughout the more than two decades spent with the firm, Heidi never once found herself bored and always enjoyed what the day and the work brought her.

“I loved the variety of what I did. Nothing was ever the same. I got to go to different clients and see what worked well and what didn’t work well,” she explains. “This let me specialize in an industry, working with high-caliber people. As it is the largest public accounting firm in the world. I was always challenged and there was always an opportunity for me to go after. Every time I asked for more responsibility or opportunity, they made it happen for me.”

Now enjoying early retirement after decades with one of the most notable professional firms in the world, Heidi says her career success all started with the foundation she laid out for herself at Utica College.