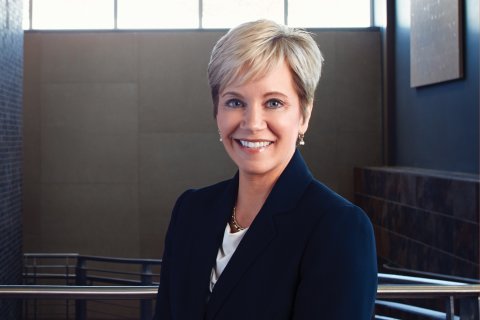 Laura Casamento became the ninth president and fourteenth chief executive officer of Utica University on August 1, 2016. She is the second president selected by the independent Board of Trustees, and the first woman to serve as president in the 75-year history of the University.

A first-generation college graduate, Laura is a passionate and learned supporter of college accessibility and affordability. She was a principal architect of Utica’s tuition reset, which has garnered national attention from federal and state law and policy makers, media, and, most important, students and families.

Under her leadership, the University has invested $21 million in capital improvements without incurring institutional debt. These expansion projects have included a new Construction Management building, a $4 million renovation to the Dining Commons, a new Intercultural and Student Organization Center, Outdoor Track and Field Complex, Career Readiness Center, Student Residential Village, Science Center, and the eSports Arena, to name but a few.

Laura has also implemented policies that have brought about major improvements in the University’s financial profile over the course of her tenure. Since she assumed the presidency, the University has developed and adopted a new 2020-2025 Strategic Plan, has achieved cash operating surpluses in excess of $5 million and increased total fundraising to more than $6 million.

During her tenure, she formed the University’s Emergency Management Department to aid in the increased safety and security of the University Campus as well as overseeing the emergency response to the unprecedented circumstances of the COVID-19 pandemic.

Laura has more than twenty-five years of senior executive experience in the private sector and higher education. Prior to joining Utica University in 2004 as vice president for institutional advancement and, later, executive vice president and chief advancement officer, she was president and chief operating officer of Herkimer County Trust, an independently owned, state chartered bank located in central New York. She served as president from April 1998 until December 2002, when the bank was sold to The Savings Bank of Utica (now part of M&T). The bank had assets of $350 million and 12 retail locations. She oversaw a 65 percent increase in net income during her tenure as president, resulting in the bank being sold at nearly 2.5 times book value.

Laura is married to Filippo Casamento, and together they have five children and six grandchildren.