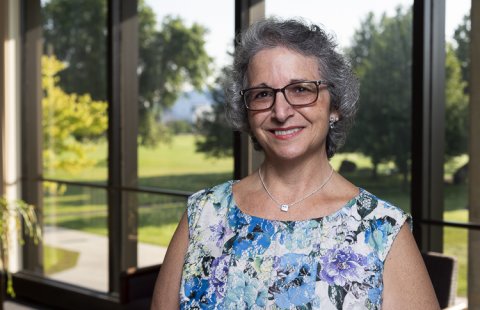 Carlota Pérez-Belcher (Assistant Professor of Spanish) was born in Barcelona, Spain but grew up in Spain, Chile, Peru and Puerto Rico.  She studied English Philology at the Universidad de Barcelona in Spain and taught English at several schools in Spain.  She earned a B.S. in Secondary Education and Spanish Studies at the American University in Washington and an M.A. in Spanish Literature at Rutgers University.  Carlota taught at New Hartford Central School District for 30 years, setting up new curriculum, advising the World Language Club, organizing study abroad trips to Europe and mentoring student teachers.  She also has taught as an Adjunct Professor at Hamilton and Utica Colleges.  She has participated and presented at NYSAFLT (New York State Association of Foreign Language Teachers) conferences.  She continues to collaborate as a writer and final editor for the Regional Checkpoint B Spanish exam.  She enjoys traveling, reading, painting and doing crafts.